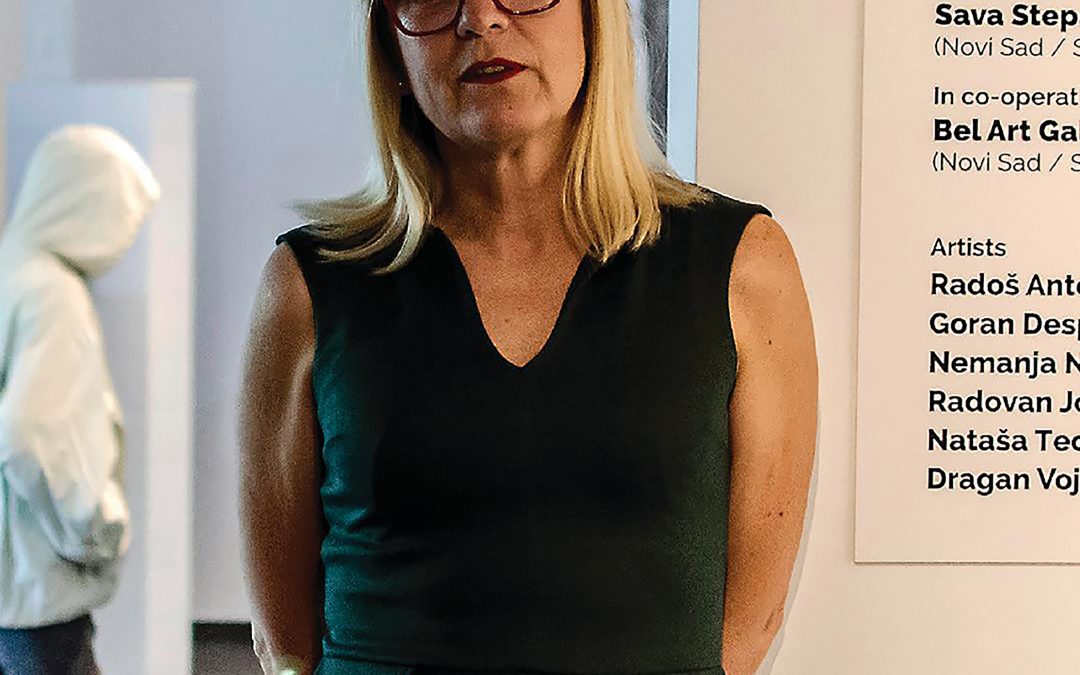 Vesna Latinović, founder, director, organiser and producer of the Danube Dialogues talks about producing a complex international art festival; cultural branding; the Danube Dialogues as a model of multilateral cooperation and cultural diplomacy; the Festival as part of “Novi Sad – European Capital of Culture 2021“ and support from the public sector.

Gallerist, art manager and publisher, Vesna Latinović studied at the philosophy department of Novi Sad University and has an MA in the management of culture and cultural policy from the UNESCO chair of the University of Art in Belgrade. She owns and directs the Bel Art Gallery, Novi Sad, and is founder and director of the Danube Dialogues Festival of Contemporary Art. In addition to heading many of the city’s cultural projects over the years, she was a member of the application team for Novi Sad, European Capital of Culture 2021, has organized many international exhibitions by Serbian artists, is a founder of the Sava Šumanović fine arts award, and founder of the Vertikala award for criticism of art.  She lives and works in Novi Sad.

DD: You have headed the production of the Danube Dialogues from its inception. This means initiating, organizing, producing and being responsible for a complex international festival that takes place at various locations in the city, involving a great number of people, local, regional and international. They include artists, critics, custodians, other organizers… In summer, two years ago, the Festival took place in several towns along the banks of the Danube from Apatin to Kladovo. What do you need to know in order to run a festival of this kind, and how much work is involved?

VL: Organising a festival like this needs absolute dedication throughout the year, planning your programme and financing a year or two ahead, a must if you want to engage top-class artists and custodians. Non-commercial cultural programmes are mostly financed through annual project competitions.  In this country they’re announced at the beginning of the year. The results come out usually in April and the money arrives in June at the earliest.  Over the past eight years we’ve learned to be flexible and to work with a certain amount of insecurity.  As things stand here, the biggest threat is long-term uncertainty and insecurity, as there’s always the risk that in the nature of things, passion and enthusiasm will wane at some point. For years now, the Danube Dialogues project has received limited support in the city, the province and the Republic, and the number of cultural sponsors and donors is dwindling. That’s why a network of reliable co-workers, partners and friends both in the country and outside is so valuable and has such great potential. Team spirit, exchange and reciprocity are key.

The Danube Dialogues is about to celebrate its tenth anniversary, and I see this tenth edition as a turning point in the Festival’s development.  So far, we’ve shown that we can do serious things with modest resources.  However, further progress and raising the Festival to a higher level will not be possible without systematic support and financial security. My motive as founder and director is finding a new management model for sustainability and development, based on the belief that the Danube Dialogues have the potential to become an effective platform for cooperation in the Danube region. This is supported by the fact that the exhibitions and programmes to date have been welcomed with great interest in professional circles, among artists and experts, by the media and by the public at home and in the Danube countries. The ultimate goal is to have a regional centre for artistic exchange, because Novi Sad holds an exceptional position, midway along the Danube, with a wealth of tradition in the fine arts and a vibrant and exciting artistic scene, very “user friendly” for getting a broader perspective, weighing up the pros and cons, utilizing and presenting the current artistic range in this part of Europe, consisting, as it does, of countries of varying status and at varying stages of development.

DD: How does the Festival encourage international cultural collaboration in the Danube region?  Do you see it as a model for multilateral cultural cooperation and diplomacy?

VL: The eight occasions we have held so far brought together over 300 artists from the Danube macro region. It showed that this regional festival looks with an equally critical eye on developments in art in the more advanced countries of Central Europe and in the less developed countries of the Western Balkans and the former Eastern Bloc, still in transition, and in crisis areas such as today’s Ukraine, where “the Danube path” comes to an end. The Danube Dialogues are in harmony with current processes of integration in the European Union and this, it seems, has contributed to making the art of these countries more compatible and so more varied, interesting and visible. So it is possible to see the Festival programme as a kind of model for international cooperation.

An examination of cultural policy in Novi Sad before a cultural strategy for the city was introduced shows that only 13% of all cultural organisations maintained contacts with their colleagues abroad. In the not so distant past, when we were living in the Socialist Federal Republic of Yugoslavia, we felt ourselves part of the international environment of Europe and the rest of the world. These ties were ruptured during the unhappy times of the 1990s and Serbia’s isolation. Then came a period of economic crisis, incomplete transition, the lack of a national cultural strategy or institutional support, all of which contributed to an unfavourable situation. Obviously, there is an urgent need to rebuild these bridges if the public and the artists are to refamiliarise themselves with other cultures and forms of expression that stimulate the artistic environment and are so necessary for artistic freedom.

DD: How does the Festival see Novi Sad as the upcoming European Capital of Culture 2021?

VL: Midway along the Danube, at an equal distance from its source and mouth, Novi Sad is considered as a bridge between East and West, between the developed European countries and those still in transition.  Through the European capital of culture 2022 project, Novi Sad has a chance of becoming an even more significant meeting point of different cultures, of possibilities for better understanding, cooperation and exchange. The Danube and its bridges are seen not only as restored architecture after the bombing of 1999, but as a spirit of renewal and reconnecting through culture.

For the past eight years, the Festival’s idea has breathed a spirit of the modernity and relevance of contemporary art into the cultural life of Novi Sad. The exhibitions and the intertplay of creative ideas from the Danube region have, in a Magris-like way, united value achievements in the art of the developed countries of Central Europe with the countries of the Western Balkans, the former Eastern Bloc and the Black Sea region. This fact alone, I think, makes the Danube Dialogues a logical constituent of the European Cultural Capital idea.  Because I think that one of the Festival’s greatest merits is that it was launched during Serbia’s complicated transition process.  In a time of profound crisis, a way out was sought through collaboration with countries in the region close to us: those with more sophisticated forms of government, but also those in a similar position and emerging from a similar milieu. The way out we sought was not through politics but genuine artistic activism. The Danube Dialogues demonstrated that Serbian art possesses exceptional potential, equal in strength to that of its more developed surroundings, and that the little countries of the Balkans, like those emerging from behind the Iron Curtain, are no longer obliged to point to the value codes of “their own roots”, nor to provide explanations for specific or incidental circumstances in their former (or present) political regimes. Because speaking the genuine language of art, our own artists, like those of the other Danube countries, have gained the right to engage with questions of contemporaneity, effective artistic universality and above all, the questions of human existence – here and now.