AESTHETICS OF INTIMATE THROUGH 4 DIALOGUES 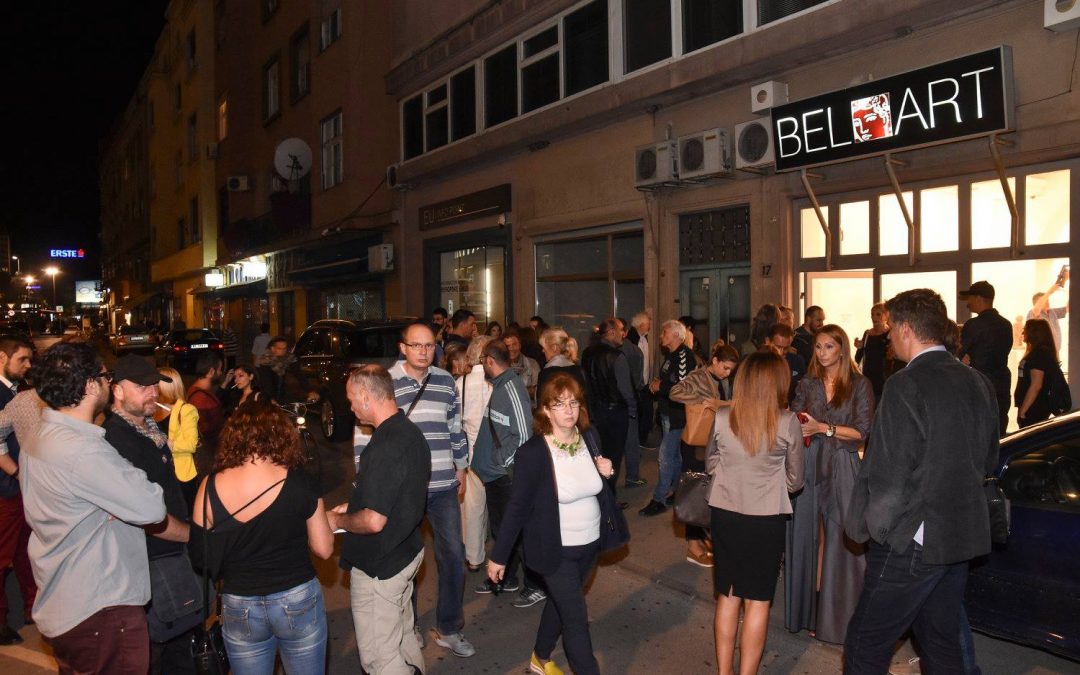 During this year’s Montenegrin-Serbian art dialogues, eight authors displayed their works on four exhibitons, four from each country. Their creative work, in a thematic, conceptual and philosophical sense, entered the dialogue long before the artists themselves had the opportunity to do so. In addition to portraying the individual poetics of artists and the environment they come from, these exhibitions highlight similar interests and universal issues that artists deal with, as well as different solutions they come up with. We asked some of them how they saw their work and the work of artists they exhibited with, as well as about their similarities and differences in the choice of fine art instruments relative to the message conveyed by their works. Here are their answers…

My paintings are not monochrome, they have a very reduced, restrained colouring. I mainly work with three or four colors, which I “balance”. The sample of the city painting (or #citysample, as I called it) with which I fill the surface of the canvas somehow fits in, multiplies and fills the canvas from edge to edge. This experience of life and the world in a digital era, as well as the oil painting medium which I use while dealing with this experience are very important to me. The pictures are not “clippings” of some infinite city landscape wallpaper but images of defined, finite dimensions dealing with the concept of the city seen through a computer screen. I look for the samples of “cityscape” paintings and drawings on the Internet, often without getting into whose the photos are or what city they represent. The most important thing for me is to feel universality in the architecture I choose, so that everyone can recognize it as his own. The reason for sample multiplication is that I paint these pictures from the beginning as “anti-paintings”, mechanizing the process of painting and omitting handwriting whenever possible.

Exhibiting with Nenad Šoškić has been a great pleasure for me and I am very happy that Mr. Sava Stepanov brought us together. Although our departure points differ, as well as our destinations, it is precisely because of the exhibition’s dialogue framework that these differences successfully communicate. What I see as a common theme of our exhibition is dealing with the multitudes and the “landscape” that the they build. I also find very interesting the link between the treatment of edges, expansion of work, and the balancing between the finiteness of the format and the (conditional) infinity of its content.

Since sculpture is a visual, spatial and indirect art, materials used are of major importance. I believe that sculpture must awaken all of our senses, and in the first place inspire us to touch it. Consequently, if you accept the material in the right way, you embark on an adventure offering different options. When I talk about the materials I use, I think about jute, straw, ash, wool and earth, which are very obedient and prone to acquire any form. For me, the accessibility of material, its quantity, colour, and the ease of working it into big forms is very significant. Basically, it is about materials that are in contact with every human being and with the world of nature that man is an inseparable part of. For example, the earth carries in itself sacredness, as something that life takes place on and that life depends on, something without which actually there is no life. On the other hand, it is related to death, it takes the dead or keeps a memory of them. I think that the sculpture has its own life, its form is born, it develops and dies. Everything that happens inside of us is just a reflection of what is happening around us.

It has been a great pleasure for me to establish a true dialogue with Zvonimir Santrač and exhibit with such an artist. It is a priceless experience for me. His work shows an obvious balance between the concept and the selection of material, between the inner content and the outside world of experience.

My creative work is based on the voice of materials that the nature itself gave them. The language materials carry inside of them and with them is concise and clear, recognizable and legible. In the creative process, I select material that I can permeate with a certain thought, point of view or a critical overview of specific social phenomenon, based on my own sensibility. During my artistic intervention, I do this while preserving the language of the selected material, trying to keep the artistic text I impress in the chosen material in a dialectic relationship with the text inherent in the material.

The similarity of Ivana’s approach to her own work, and in relation to mine, is reflected in the fact that she is thoughtful, to put it simply –  engaging and carrying an antiglobalistic stance. Ivana insists on her nation’s name and surname, she talks about her roots. Her ability to use the minimum of expression to achieve the maximum of visual content is impressive. She uses the speech of consciously selected material, the red earth saturated with iron oxide from her local area, the barren straw after the harvest, fulfilling the form of empty, decapitated people, cut out of rough jute canvas.

BORDER pictures were created as an attempt to get closer to a minimalist view of the image. At first, the colour had a completely unimportant role, but later it became the carrier of dynamics and took on the parallel role of drawing and the role of space. In my opinion, the colour best describes the concept of borders in the modern world.

Vesko Gagović also uses the language of mimimalism in a very reduced and striking way. In our case,  two similar artists are a joy to each other.