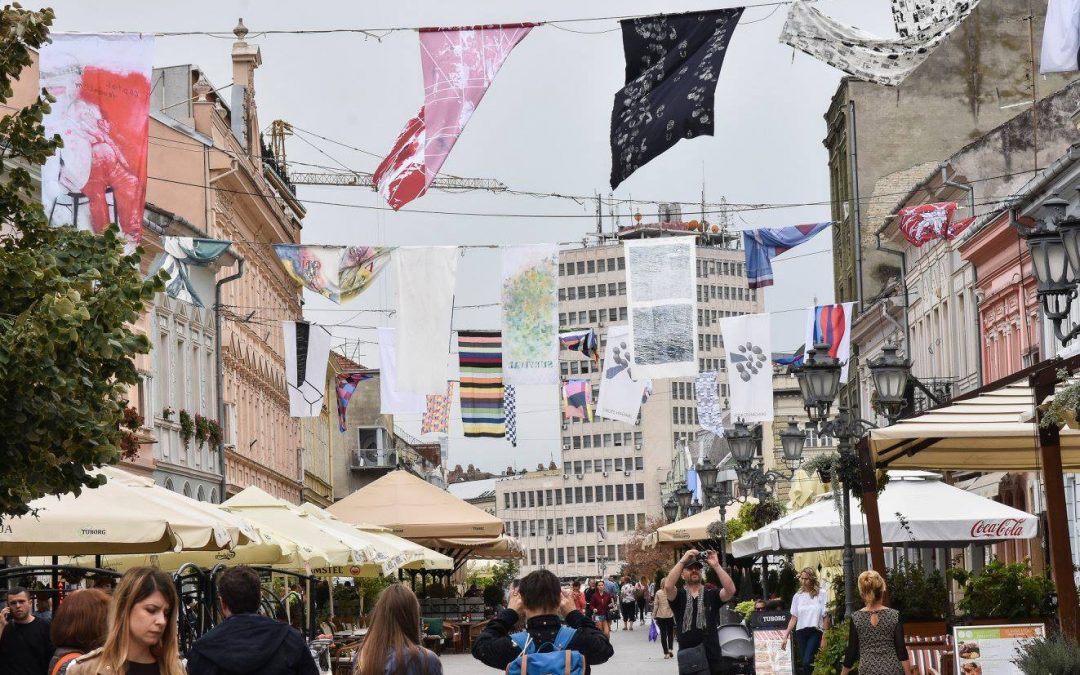 Forty six artists from nine European countries (Austria (18), Bulgaria (3), Croatia (2), Germany (8), Hungary (1), Romania (5), Slovakia (1), Serbia (7) and Ukraine (1)) participated in the international flag exhibition “Migration – Aesthetics of Change”. Some of the artists tried to summarize their own artistic poetics in the symbols with which their overall work can be recognized, while others reflected in the social context. However, for all of them the flags also presented a double challenge. On the one hand, the topic itself called for a deep reflection of the most intimate attitudes towards the world and society of today, while on the other, for some of them this form of expression meant encountering something completely new in their work, because the work publicly and proudly fluttering above the heads of passers-by actually is a completely personal expression and view of every author as an individual.

We asked some of the participating artists to tell us the stories behind the flags they made.

In our joint work entitled “Bloody Flag of the Nation”, we wanted to make visible the stains of blood from state flags. For example, for the Austrian flag, there is a legend about the Austrian Count Leopold V, who was supposedly wearing a white tunic in the battle during the siege of Acra, which was soaked with the blood of Muslims after his victory during the Third Crusade (1189-1191). The only place on the tunic which remained white was under his belt. This legend is still taught to children in schools today, although historically unverified and most likely wrong. On the other hand, all national flags symbolize both unification and expulsion, acceptance or non-acceptance. Migration is always a threat to the system. Both in the past and at present, these indivisible contradictions are related to violence and rejection. This is presented with symbolic blood stains on our work.

In my work, I focused on the famous women who lived in Vienna, and are completely forgotten today. Among them, Paula Preradović, the author who wrote the lyrics of the Austrian anthem, was especially interesting to me. I made two flags in Austrian national colors, with lines in red letters. The lyrics of the hymn was written in the languages ​​of many minorities living in Austria, including Serbian. These two flags are the beginning of a series of twelve flags the letters of which will become paler and paler, turning from red to gray, representing the languages ​​of all the nations living in Austria as they become increasingly intermingled while the lyrics of the anthem loses its meaning. (+ PHOTO)

I have displayed two flags focusing on the topic of feudalism because I believe that today’s society has not actually changed much from that system but only taken a different form. Although we feel secure living in a democracy, we have never overcome the feudal system, and that is the story behind my “Capital Feudalism” flag. The second flag is called “Revolt” and it invites everyone to use their democratic and human rights to oppose feudal systems. (+ PHOTO)

Through my graphic display of a traffic sign representig a dead end, I wanted to point to the manipulation of truth by great powers, which I consider the cause of conflicts and wars

taking place throughout the world on a daily basis. The North African spring and the alleged toppling of dictatorships in Libya, Tunisia, Egypt, even Ukraine, reminded me of the break-up of the country in which I was born. The dead end sign has three colors appearing on the flags of great world powers, i.e. the countries responsible for system changes in all the above-mentioned countries. On the other hand, the sign itself reminds me of  a hammer, whose mallet I slightly distorted and enlarged in order to emphasize the fatal and inevitable connection between every undiplomatic instrument, aggression and lies and a hopeless  situation into which not only individuals, but also entire nations are brought.