Mladen Lučić: Danube Dialogues have confirmed this year too that they are absolutely up-to-date and that they have a keen sense of time and place in which we live. The very choice of topic Art and Global Insecurity had foreshadowed interesting exhibitions, very up-to-date in terms of current socio-political situation, which they to a large extent confirmed with their topicality and quality. It is evident that the current global political situation, characterized by numerous wars, terrorism and migration crises, as well as by growing hypocrisy of ethics and morality, is affecting artists from participating countries very deeply. What gives us hope in the artistic sense (and for that we must commend the selectors for their choice of artists) is the fact that almost none of the authors responded literally to the difficulties of the present time (e.g. by means of an illustration) but rather expressed their attitudes and reactions through subtle metaphors and exclusively in the language of visual art. The invited artists showed their creative maturity, and after being bombarded in recent years by many agitator pamphlets hidden under the guise of art, we were finally able to welcome them speaking about the pressing problems of society in their own language, their individual artistic sensibility and inventive creativity. The exhibitions staged for Danube Dialogues have made it clear that authors differ again, in other words – that art succeeded in abolishing uniformity which ruled over the past few years. I think that the contemporary European art, represented by the protagonists of Danube Dialogues, returned to positions that belong to it. Art is back to its true and historically justified role of the creative, explicit, but also discrete commentator of social and political reality. After having analyzed the works displayed, I am convinced that art is not at all threatened by global insecurity because it not only adequately responded to the socio-political processes in a number of crises but was exactly then at its best! Of course, the avant-garde is always great, but the artists who exhibited at Danube Dialogues have also confirmed the thesis that art is above reality. Their participation also points to the importance and high quality of this event. If only those concerned would realize that, and enable Danube Dialogues to finally receive adequate support from parent socio-political institutions. 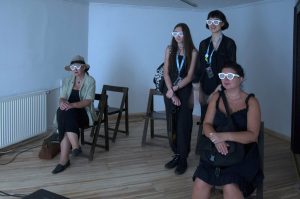