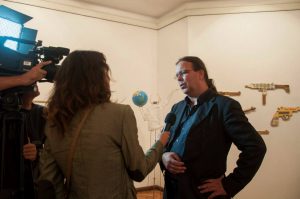 /Art critic, artistic director and curator of the key exhibition of the Danube Dialogues (Serbia)/

To my way of thinking, we got a very interesting exhibition which lived up to its name in every aspect. It was envisaged as a grouping of three selections.  I think that all three of us were consistent in our responses to the set theme: clear in our views, the selection of artists and their works and in our remarks.  I tried to show that the use of technology in art can help overcome the various crises which arise from technical progress itself.  My choice highlighted: (a)  artists who express their emotional state through technological means, and (b) artists who explore their own emotionality through the use of contemporary technology.  It seems to me that Dr Vladimir Beskid’s selection is close to this concept, as it very effectively and proficiently unites and takes stock of the artistic personality through the lens of the sociology of art. Ultimately, Hartwig Knack surprised me by his selection, as he saw his starting point from an inverse direction: he is interested by emotions as the underlying factor that gives birth to the art work and is found in certain extreme situations and environments.

So, yes, the exhibition opened up other questions, which is, of course, a good thing.  In fact, as artistic director of the Danube Dialogues Festival of Contemporary Art, it is what I had hoped for.  The entire concept of the Festival is based on dialogue, on respect for a divergence of opinion and outlook and tolerance in communication and discussion.

I think the curators are not necessary to be in harmony. It is not needed for them to play equally following the same notes. Just on the contrary, each musical instrument should play its different part in order to finally create an interesting and fancy orchestral music of these times. An intention is to record unclear today´s “sounds“, their signals and codes and then to make them in the visual language.  The “three voices” of curators have made a good foundation to look for a common tone of the festival.

For me personally it was a unique and beneficial festival model itself – its scattering in many smaller spaces, which affected all the city, and on the other hand, a short expert symposium that provided a needed platform just for this discussion about reflecting on the present days and forms of contemporary arts.   Finally, after this exhibition the following question stays raised: How to restart or remix emotionality in the contemporary visual arts and mass media world so that the contemporary arts was and also stayed in this “senti- mental“ double coding?