Art dialogues along the Danube: From Apatin to Kladovo 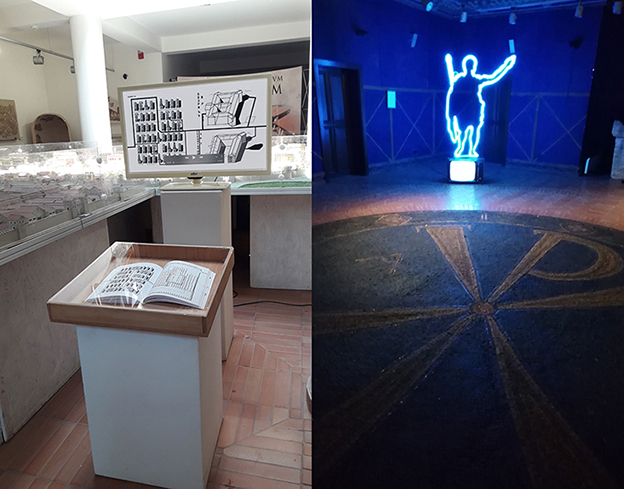 The first exhibition from the series Art dialogues along the Danube was staged on June 27, 2019 at the famous archaeological site of Viminacium (near Stari Kostolac, 12 km away from Požarevac), which existed from the 1st to the beginning of the 7th century. Viminacium was one of the most important legion camps on the Danube, and for a while the capital of the Roman province of Moesia Superior, which included most of today’s Serbia, northern Macedonia and northwestern Bulgaria.

The works of Pavlo Makov (Ukraine) and Čedomir Vasić (Serbia) were incorporated into a permanent museum display of the Domvs Scientiarivm building, built in the rustic style of a Roman villa. Also, it is important to emphasize that the works of Makov and Vasić fit in the conceptual spirit of the Viminacium Theatre Festival entitled Old and New Myths, held at the same time in this archaeological park.

Pavlo Makov presented his art book DO-PO (2018). He creates detailed drawings of  gardens and cities – real and utopian. The precise city plan drawings and sketch block drawings are converted into vector presentations, positioned on both sides of an open book, interlaced with joint routes. In his art book DO-PO Makov juxtaposes the idealized appearance of a large city with drawings from his pocket notebook, creating spaces between reality and dreams. Makov’s open book and screen with an animated video presentation of the drawing from this map book, was placed directly next to a large model of Viminacium. As a result, a provocative relation of the Makov’s contemporary world and the artefacts from distant history was successfully created in the ambience of the Viminacium Museum, opening the new spaces of metaphorical anticipation and conclusions. Čedomir Vasić placed a neon figure of the founder of the Roman Empire, Octavian Augustus, (Untitled, 1992-2019, installation, neon tubes and light, television, wire) in the ambience of the Viminacium Museum, in the hall with the figures of 17 Roman emperors born on the territory of today’s Serbia. Having put his work in this context, the artist suggested an imaginary connection of the founder of the empire with the “local” Roman emperors – striving to initiate a multi-layered reflection focusing on a complex set of archeological, historical, scientific, philosophical, symbolic, metaphorical, aesthetic and ethical issues. This contextualization of his own spatial installation enabled the artist to open a debate on the possibility of a modern (re)interpretation of the world in order to get essential new insights into the dialectical character of the world we live in.

This display has brought the works of these two artists into a kind of dialogue, which is compatible with and incorporated into the spirit of the Viminacium site. At the same time, their two completely different artistic positions have been brought into a close relationship based on the complementary reminiscences of the historical continuity phenomena, made possible by the exhibition concept which created a kind of time interplay revealing new relationships, layered observations and conclusions.

Pavlo Makov was born in 1958 in St. Petersburg (Russia). He lives and works in Kharkov (Ukraine). He graduated from the Crimean Art College Department of Painting (Simferopol, Ukraine, 1979); at the St. Petersburg Academy of Fine Arts (1978); and at the Kharkov Art and Industrial Institute (1984). He is a member of the Artists’ Union of Ukraine, member of the Royal Society of Painter-Printmakers (London), and a correspondent member of the Ukrainian Academy of Arts, since 2006. Pavlo Makov is a participant and a winner of numerous awards at graphic exhibitions in Ukraine and abroad. He is also a contributor to art projects in Ukraine and abroad. His works are exhibited in museum collections in Ukraine, Russia, Hungary, Italy, Spain, Great Britain, U.S.A. and other countries.

Čedomir Vasić was born in Belgrade in 1948. He graduated from the Academy of Fine Arts in Belgrade, where he also obtained a master’s degree in 1973. As a holder of the Fulbright Programme scholarship, he spent the 1975/76 academic year at the University of California in Santa Barbara and Los Angeles studying video and computer arts. He has been exhibiting since 1969. He organized a large number of solo exhibitions and participated in numerous group exhibitions in the country and abroad. He taught at the Faculty of Fine Arts in Belgrade, at the Faculty of Dramatic Arts. Together with Vladan Radovanović, he introduced Interdisciplinary Art Studies to the University of Art where he worked as a professor for multi-media art. He was the Rector of the University of Art in Belgrade (2004-2009). For his artistic and educational work he received many prestigious awards and recognitions. He lives and works in Belgrade.

EXHIBITION OF ART FLAGS OF HUNGARIAN AND SERBIAN ARTISTS

As a result of the cooperation between the BelArt Gallery of Novi Sad and the Kladovo Cultural Centre, the flags of Hungarian and Serbian artists were exhibited in Kladovo from 11 to 25 July 2019. This was a very special display, offering artistic solutions that speak primarily about aesthetic and ethical issues. All the participating artists are well aware of the fact that flags are symbolic creations calling for respect. They are an established symbol of organized society, a sign of identity and recognition. According to the Dictionary of Symbols, a flag is a sign of protection that is provided or asked for. This is why it is carried above our heads, directing the call for protection to the heavens. In Christianity, a flag symbolizes the victory of resurrected and glorified Christ. At the same time, in many cultures, it is not just an emblem of a particular organization, but often a sign that symbolizes the essential character of the person it embodies, the person that carries and keeps the flag.

The flags of Hungarian and Serbian artists displayed in Kladovo provide one possible view of developments in contemporary art. Today, art is often presented as a spectacle, as a performance, as an open event. At this exhibition, flags were displayed as an artistic solution, communicating with their ethnic and folklore roots, carrying a direct written message, thier appearance changing in tune with atmospheric conditions, and dealing with the destiny of man in contemporary society. This dialogue was turned into a “conversation” in which, according to György Konrád, “flags represent artistic creations exhibiting specific, personal style and manner of expression. They have no specific topic, representing instead a way of artistic thinking by means signs and symbols. With imaginative, fresh ideas and forms, and often with astonishing use of material – they create a scene of defined strength, thus making our immediate environment and the city we live in more beautiful, fresh and more meaningful … “