Introducing the artists of the Danube Dialogues 2019 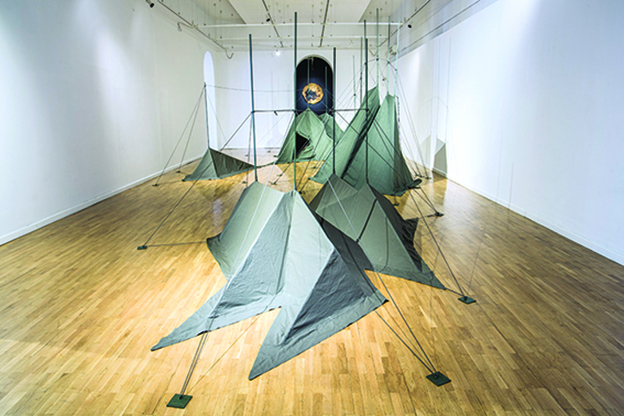 Radoš Antonijević, Stand in his place

Photo courtesy of the artist

We shall start introducing the artists of this year’s Danube Dialogues with our national creative artists: Ivana Tomanović and Radoš Antonijević. Below you can read more about their poetics, as well as some of the most important biographic data.

Radoš Antonijević was born in Pančevo, in 1969 and grew up in Smederevo. He started studying sculpture at the Faculty of Fine Arts in Belgrade in 1992, and graduated in 1997 as a student of the generation. From 1997 to 2000 he attended MA studies at the same Faculty. From 1999 to 2001, he worked on the founding of the City Gallery in Smederevo, and then became its first curator. Radoš started working at the Faculty of Fine Arts in Belgrade in 2001 as an assistant, in 2007 he was elected an assistant professor, and since 2016 he has been working as an associate professor at all levels of study. He has been teaching Sculpting at the Academy of Arts in Banja Luka since 2000. From 2010 to 2013 he participated in the founding and work of the group of artists The Third Belgrade. He defended his doctoral thesis on Form Correctives – a guide through sculptural phenomena in 2014.

In his artistic work, Radoš Antonijević examines the medium of sculpture and its boundaries, creating works of art that problematize the relationship between the form, function, materiality, and perception. The topics of his sculptural works are always related to the neuralgic points of life, dealing with the aspects of history, politics, culture and society. His works have an epic nature with tinges of spiritual, absurd and tragic. In an essay titled Form Correctives from 2012, Antonijević writes: “Artistic truth is not scientific, but it is nothing less important because art can find a form to combine seemingly unmatchable. It has always been an adhesive that connects our internal fragmentation and brings to light our hidden frustrations in order to help us cope with them.” Antonijević has publicly exhibited his works since 1998 and has more than 20 individual and over 50 group exhibitions. His most representative individual exhibitions are those held  at the Museum of Modern Art of Republika Srpska in Banja Luka (2017) and at the Salon of the Museum of Contemporary Art in Belgrade (2015), while his appearances at the National Museum of Contemporary Art in Bucharest (2014), at the Museum of Contemporary Art in Belgrade (2012) , as well as in the Styrian Autumn in Graz (2009) and at the October Salon in Belgrade (2003, 2004, 2006) should be singled out among his group exhibitions. He lives and works in Belgrade. He is also married and father of four children.

Ivana Tomanović was born in Novi Sad, in 1971. She graduated from the Faculty of Film and Television (FAMU) in Prague – Photography Department. From 2001 to 2015, she worked as an editor in the magazine for culture of photography – ReFoto (Belgrade). As an associate professor, she teaches photography at the Academy of Arts, of the University of Novi Sad and at the Academy of Arts of the Alfa University in Belgrade. She was the Artistic Director at Artget Gallery of the Cultural Centre of Belgrade for the season of 2016. She lectures regularly on the theory of photography and participates in numerous panel discussions within the framework of the festivals, workshops and congresses dedicated to photography and visual arts. So far, she has published over three hundred articles in the Refoto Magazine, catalogues of exhibitions, books, and magazines. Ivana has been jurying numerous exhibitions in the country and abroad. She is the representative of Serbia in the “Transeurope” project dedicated to European contemporary photography. Her photographic work is predominantly dedicated to subjective research work through the fields of documentary photography and mise-en-scene.

“The landscape represents two contradictory concepts – vast/unlimited space and limited space. Vast in its size and limited in the eye of the observer. The landscape contains in itself an entirety/whole and a part/detail. The observer is rarely aware of the entirety, because the detail is what his/hr what preoccupies his/her concerned “vision”. However, the entirety is contained in the detail which essentially represents the sublimation of the entirety in small. A specific relationship of elements in the landscape creates its visual characteristic that carries an emotional context for the observer. Considering that we “recognize” certain landscape as an attractive, close, interesting, exciting … our own, we recognize ourselves. We reflect in the chosen motif of landscape, showing our own image.” (Ivana Tomanović)