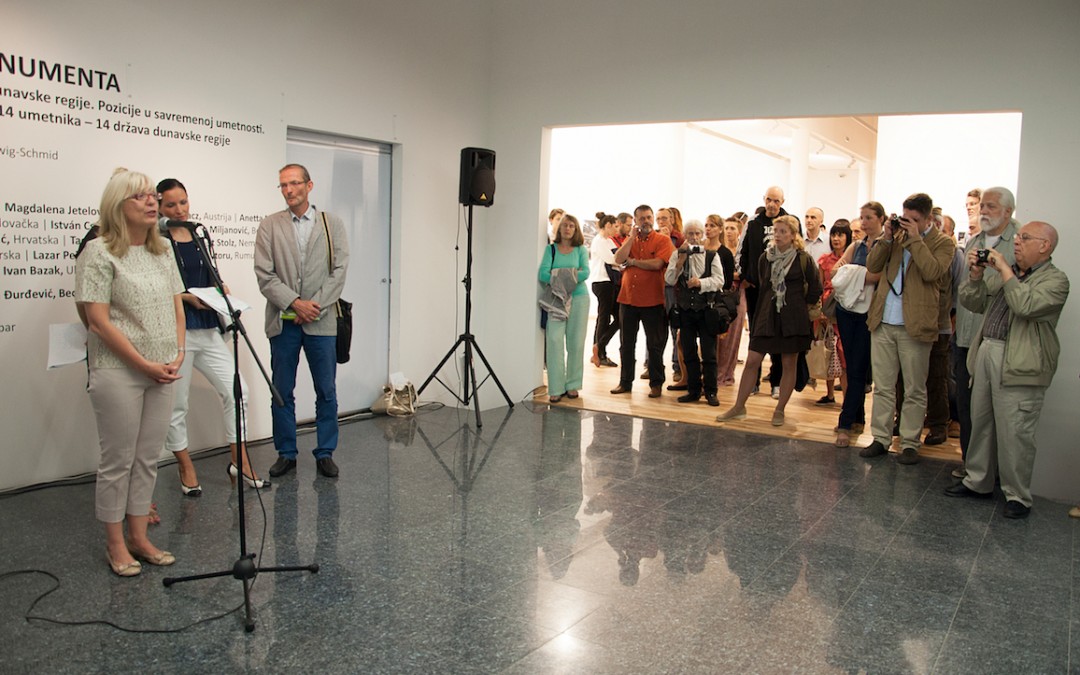 In August-September 2014, Novi Sad was again the meeting place of modern art and artists in the Danube region, as the Danube Dialogues Festival of Contemporary Arts came round for the second time. The selection of artists from the various countries provided an opportunity for the public at large to see and appreciate works that truly represent current developments in this locale. The exhibition by Director of the distinguished Viennese Artmark Gallery, Thomas Mark, presented contemporary Austrian artists such as Florentina Pakosta, Fritz Ruprechter, Janos Megyik, Franz Riedl, Christian Eder, Eric Kressnik, Robert Gschwandtner and Hermann J. Painitz; besides her own works, Bulgarian curator and artist Elena Panajotova selected works by Atanas Gadjev, Delia Chausheva and Atanas Atanassov; in an independent exhibition, Slovakia showed Rudolf Sikora, the choice of Dr Katarina Bajcurova; Romania: the painter Dan Palade, with a critique by art historian Dan Popescu; Croatia was represented by artists Đorđe Jandrić, Iva Gobić, Ivan Posavec, Sebastijan Dračić, Zlatan Vehabović, Matija Debeljuh, Alen Floričić, Davor Sanvicenti and Šikuti Machine, selected by Mladen Lučić; Germany by Sandra Zarth and Claus Dieter Geissler from Cologne, with a written introduction by Dr Martin Turk; Serbia by Radoš Antonijević, Andrea Ivanović-Jakšić, Veljko Vujačić, Vesna Perunović, all selected by Sunčice Fenjčev Lambić. The host country took advantage of its privilege as organiser to round out the Serbian representation this year with the Novi Sad + programme, showcasing works by Novi Sad artists Abi (Slobodan Knežević), Dragan Vojvodić and the performance art couple MP_art. Sharing both the exhibition and the geographic location, the artists were an invaluable source by which to gauge the climate in contemporary art in their own countries and throughout the region. A special feature of the Danube Dialogues are exhibitions by Serbian artists held in tandem with counterparts from other countries. In this, the second year of the Festival, Art Director Sava Stepanov selected Slovaks from Serbia to engage with artists from Slovakia.

These very well-attended dual-exhibitions by Jožef Klaćik – Martin Derner, Jan Triaška – Olivera Stefanović Triaška, Rastislav Škulec – Viktor Frešo and Mira Brtka – Marek Kvetan highlighted similarities and differences in the work of these exceptional artists, while clearly pointing to opportunities for further communication of this kind and the benefits to be derived.

An interesting new departure for the Festival was the round table Art and Crisis, in collaboration with the Vojvodina Institute of Culture. Taking part were: Mladen Lučić (Croatia), Ana Petrović (Austria), Katarina Bajcurova (Slovakia), Regina Hellwig-Schmid (Germany), Sava Stepanov, Sunčica Fenjčev Lambić, Slavica Popov and Lazar Marković (Serbia). The title theme owed its choice to the many manifestations of various types of crisis which have recently made themselves felt in the region of this great European river. Indeed, crisis appears to be immanent to modern man, just as we can conclude that there is a crisis in the environment in which art originates and has its being. How are the symptoms reflected in contemporary art? How do artists from differing political, social and cultural backgrounds see crisis? How do they react and do they feel the need to? These were the questions that informed debate at the symposium.

A unique international project, THINKtent, was the contribution of special guest of the Danube Dialogues 2014, Natasha Cica from Australia. After the Sydney Opera House, Hobart’s Museum of Tasmania and the Belgrade Contemporary Art Museum, this travelling tent provided the public in Novi Sad with an intimate, welcoming and secure atmosphere, a place where artists, curators and participants were able to discuss and exchange opinions with Natasha Cica as moderator on “Cultural identity in the Danube Basin – Does Art really Communicate across Borders?”

This year’s Danube Dialogues 2014 have demonstrated that the Festival’s creative team continue working steadily and systematically to bring about the vision of Novi Sad as a place of encounter, critical thought and cooperation among those involved in contemporary art in the Danube region. Simultaneously, the idea was promoted of extending the festival to other cities in the area, so that Zrenjanin, Baden and Mödling were hosts to exhibitions by Austrian and Serbian artists.

In conclusion, we note that in 2014 Novi Sad was host to forty artists, out of a total of 97 participants. The opportunity for meetings and encounters, their presence in the many galleries and other more unconventional spots around Novi Sad and Petrovaradin once more enriched our city, imbuing it and the numerous visitors from the region with a unique atmosphere of coexistence, the exchange of ideas and positive energy, which only art works and the messages they convey can give .