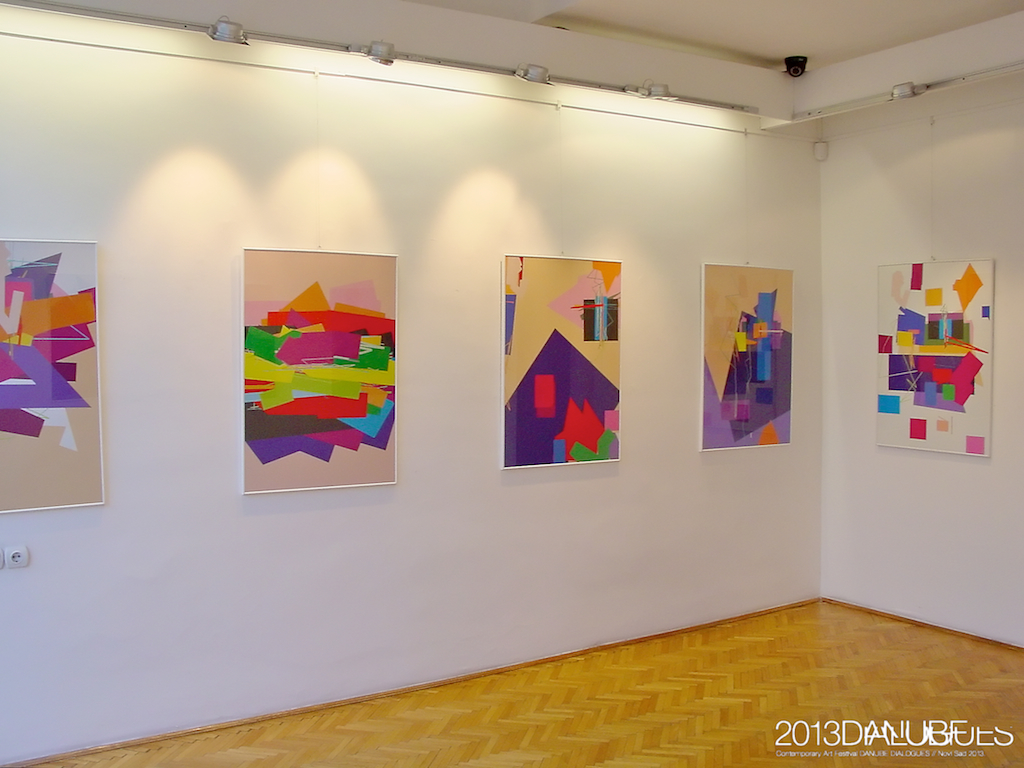 From the very beginning, prints have become a part of the work of Viktor Hulík; the artist has exploited untraditional media, experimenting methodologically and formally. Initialy he applied photography to the art concept, using silkscreen and offset, a new technique in the seventies. Thus graphic art penetrated into and completed his artistic creation, resolving similar problems and making use of its own means. The computer as a new medium offered further opportunities for the graphic work of Viktor Hulík. The variable geometric principle, which the artist developed in his creation of objects, entitled Movers, challenged him to transpose it into the computer. Thus the artist´s experience gained in his work on the geometrical detail acquired a graphic form. He began to multiply a single part of the „folding meter“ to create a series. In comparison with his objects, it was inevitable to change the syntax. The arragement of spatial compositions linked and layered those phases of form and movement in which the mover enlarged or diminished. Their multiplication fixed into a single image, or series. Thus a new visual system was created, initially starting with a clearly given structure, which gradually became chaotic. The fictitious or mechanical movement, which has always been part of Hulík´s works, has acquired a new aspect in the latest graphic series. Its individual phases are layered, creating nests and clusers of linear structures, which seem to have nothing in common with order and geometry. The initial beginning of clear geometric structures is also missing. The contemporary series combine acting and movement in progress. The beginning and the end are neither necessary nor interesting – it is a sort of disrupted serialisation – because the series does not (necessarily) create a linking logical continuity. The multi-layered movement forms the pictorial gesture with a new dynamism. Sometimes the movement has more or less one direction, another time expands in all direction and details, the fragments of entangled lines move away from the centre and set out on their own path of adventure. Another new element in his work is ťhe uneven thickness of lines. The broad lines highlight the composition and introduce the viewer´s vision into the picture. The introduction of colour plays an important role as a shaping element with a distinguishing form and space creating function. Yes, it is as if the adventure of line ignored the rules of logical systems. However, it is the reverse of the same coin.

A central figure in Slovakian geometric abstraction, this year Viktor Hulik (b. 1949, Bratislava) celebrates forty years of creative work from the time of his first exhibition together with D. Turanski at the V-Klub in Bratislava. The following year, 1974, he graduated from the Fine Arts Academy in Bratislava, class of Professors L. Čemicki and P. Maćejka. One of the highlights of a varied and interesting career was membership in the international INT-ART group, leading to his presence at the 1989 symposium in Subotica, Serbia. His artistic career took on international dimensions following a visit to New York in 1990. Apart from his association with INT-ART, Hulik’s works were shown throughout Western Europe: Germany, France, Denmark, Britain, Switzerland as well as in the US. He often exhibited in Germany and in America, where he also lectured at various universities. In 1996, Hulik set up his own agency ARTlines, and founded Gallery Z in Bratislava. Hulik’s initial interests were in civilisation and technology, which he expressed in stylised geometrical forms. Here the duality of the natural and the civilised came to the fore and is still present, if somewhat disguised, in his work. He has an abiding interest in the ratio of order to chaos, which is capable of continually changing into new visual forms. In the mid 1980s, he decided to take a step into kinetics, and worked on mobile objects. Among many others, his well-known “mover” (posuvače) dates from then. Apart from these and grappling with problems of how to conceive space, Hulik worked in parallel on cycles of graphics. It should be pointed out that he is one of the pioneers of computer graphics in Slovakia. His first exhibition of this type of art was in 2001 in Bratislava at the Gallery Z. The works were shown at the Danube Dialogues 2013 exhibition in Novi Sad. In creating his graphics, Hulik draws on experience gained when working on mobiles. His graphics, in fact, document individual stages in the movement of the structure. Through this system of illustrating geometrical structures, Hulik came to the conclusion that chaos is only another form of order, a new postulate of identical elements.