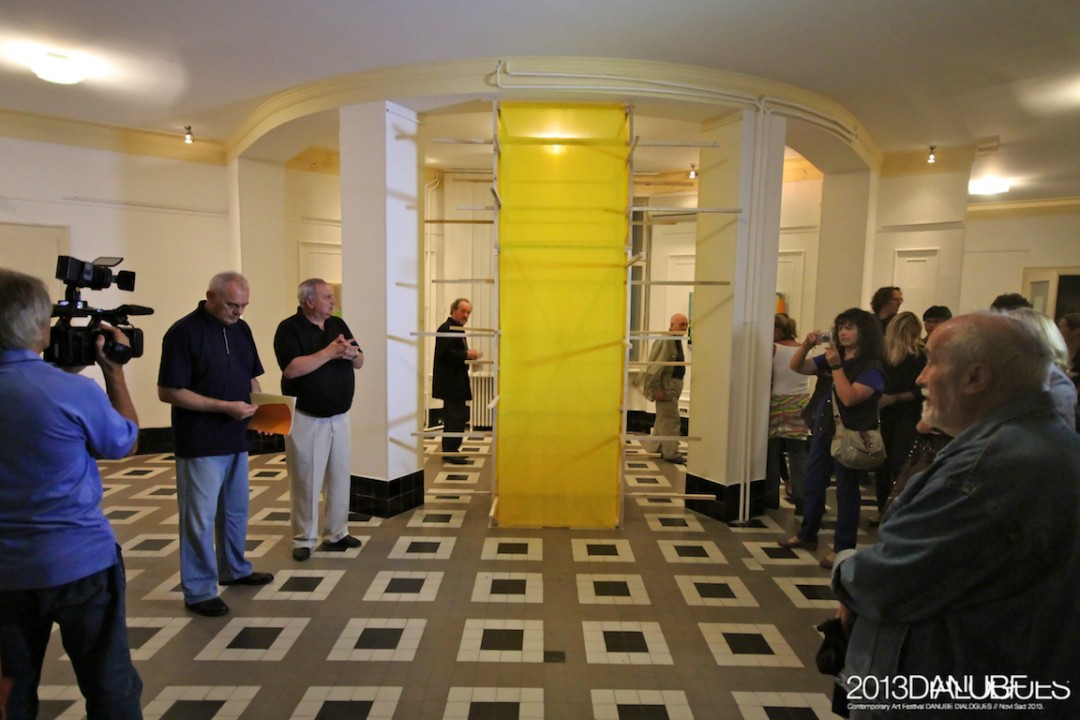 “What you see is what you see“ is American painter Frank Stella’s snappy analysis of abstract art. If we consider the works of the Cologne artist Georg Gartz from this associative point of view, we experience his abstract paintings as sensorily perceptible analogies of something which in principle surpasses our understanding. We can describe what we see, but we cannot conceptually take it in. The emergence of a picture, the process by which the imaginary takes on material form, flows intuitively. To the background of a white canvas, he brings basic, simple relations of colour and shape and so formulates his first picture. Parallel surfaces of colours are made up of a series of variations on a single theme. The intuitively grasped basic idea determines the composition of simple and complex relations between rhythm and proportion. After the formalised setting of the composition comes the synthesised process of searching for expression. Fast-drying acrylic paint enables a vehement approach to the canvases. The pictures emerge strongly and intensively through the long searching process, free of any intent. Furthermore, Gartz consciously resists any planned thinking aimed at concrete representation. Elements of accident and surprise are the moving force of the creative process, bringing their own logic to bear, which the painter recognises and follows. This attitude towards his own creativity comes from a deep doubt of his own judgment with regard to the motif depicted. Constant alternation of material enrichment and physical compression, structures and colours gradually leads to a levelling out of colour with diverse and subtle mixing of paint, creating an atmosphere composed of analogy and harmony, opposites and contrasts. Shifting, adding and repainting vary the painted structure and construct variations of the constant. Breaking down, compressing, and concentration have the effect of a sequence of constructive and destructive development. The starting point of the compositions was made up of structure and forms of contemporary architecture: geometric building elements, cascading cubes, multi-storey buildings and special constructions, as for instance the corn silos in Baranda. Along with a certain number of paintings, Gartz presents a plastic work as the central object of the exhibition. The installation “Entertainment Center” dominates the Most Gallery in Novi Sad, while setting the spatial relations marked by the symmetry of its wall and floor decorations and the showcased pictures. The work is a simple construction, which when reduced to a small number of structures sets the essential determinants of the material and its volume. Its existence remains enigmatic: despite the simplicity and fragility, it seems neither purist nor unemotional, but makes a strong effect of aesthetic certainty. So we discover that the plastic works of Georg Gartz emerge analogously to the paintings. Perhaps they grew out of the surface of the canvas and developed into a third dimension. From this consistency, confirmed in the numerous experiments of recent years, came collages and paintings in intense colour and materials, monumental and landscape sculpture (land art) as well as installations.

Georg Gartz, Germany’s entry for the Danube Dialogues exhibition, is an artist of the middle generation who comes from Cologne, the city which houses one of the world’s best collections of contemporary art: the Museum Ludwig. This may seem to be of no great importance until we remember that among its treasures is the largest collection of contemporary American art in Europe. In addition to his knowledge of European artistic production, Gartz is also well acquainted with the works of the most distinguished representatives of American art. This throws significant light on the artist’s own creativity. The main body of his paintings comprises spatial installations and pictures, usually large-format, meticulously planned and superbly executed. Gartz the artist is totally and uncompromisingly committed to his own ideas. Architecture and space are the springboards for the construction both of his pictures and installations. This is best seen in his earlier works, where he relies heavily on (his own) photography of scenery or architectural vedute as the basis for pictures and installations. At first, he made his own interventions, drawing or painting on the photographs and later using them as a pattern or take-off point for the execution of works of larger dimensions. Thus he arrived at his large-format pictures, whose huge coloured surfaces simplify the underlying photograph to the point of unrecognisability. His approach to his installations is the same. These are usually made of recycled material, painted in colour or clad in fabric or paper, starting with a model or pattern which is then altered so as to be unrecognisable. They sometimes embody seemingly practical objects, such as The House of the Gardener (2003) or Greenhouse (2003), but the choice of location (The House of the Gardener was erected in a hotel in Lindlar and constructed out of recycled material: plywood, old doors and chipboard) shows the artist’s attitude towards space through his deconstruction of it. Greenhouse is situated out-of-doors. The installation is made of blue planks measuring 2.4 x 1.2 x 2.4 metres on which pots of flowers have been laid out. The fact that this installation with its flowerpots is out in the open, surrounded by greenery, creates a new vision of the aesthetic which the artist wants to emphasize. Another group of installations is located sometimes in an exterior setting, sometimes in an interior. Usually in the form of tall box-pillars built of planks clad in coloured cloth or paper, they are at the same time spatial paintings of multiple meaning. One such installation was sited in a church, the choice of location itself becoming a message from the artist. At the Most Gallery exhibition, Gartz proposes a dialogue between an abstract object and an abstract painting, the one continuously permeating the other. The artist’s wish to define and clarify in a subjective way the space provided by the gallery offers it the chance of living another, different life expressed through colour, dominant both in the pictures and in the installation at the gallery’s centre. Georg Gartz is an artist who delves deeply into both the reality and the idea of the picture. In addition to painting, he is engaged in active dialogue and work with other artists. He has launched some very valuable projects in Europe such as Eight Days a Week, the graphic project Deep Black and Chatting with Colours.