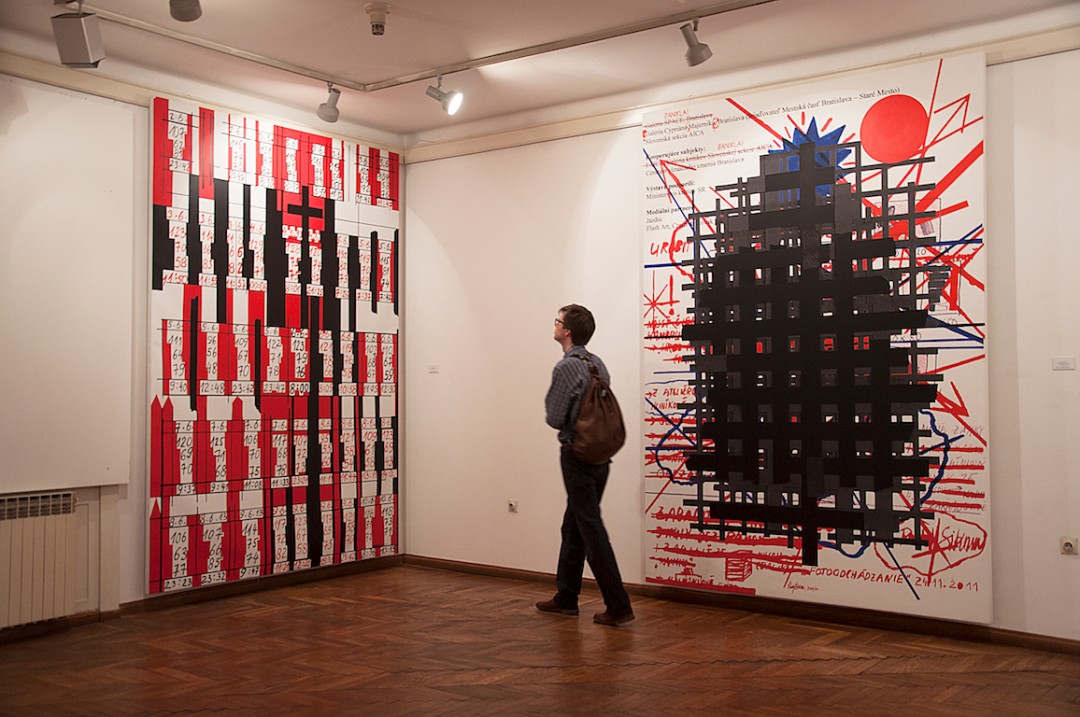 (While Checking the Blood Pressure and Phoning)

Everyone who is personally acquainted with the Slovak artist Rudolf Sikora (1946) knows that he cannot imagine his life without creative art and – the mobile telephone. The new cycle of works which was premiered at the Zahorian&co Gallery in Bratislava this April and which we are presenting now as a part of Danube Dialogues in Novi Sad (with a new image created for this occasion) is connected with that gadget quite fundamentally. As evidenced in the exhibition title, which he himself devised, these works came into being while measuring blood pressure and phoning. In this instance Sikora, when creating the new series of works, used personal notes, memoranda and drawings which had resulted from other activity, or indeed non-activity. While one hand was occupied with the blood pressure monitor, telephone receiver or mobile phone, the other hand (for years on end), apart from recording necessary and useful things (blood pressure values, telephone numbers, names, dates, deadlines, meetings…), often worked automatically and subconsciously, drawing, scribbling, jotting down something extra. And here and there revealing more than the author may have intended… His basic material was ordinary waste paper, in every household condemned to be discarded after initial use: faxes, e-mails, invitations, and grid notepad sheets. Hence the communicative Sikora, who is capable of spending long minutes and hours of his life on the telephone, did not let this time go by, so to speak, uselessly (with the progress of mobile technology he was ultimately able to disencumber both hands, so that he could even paint freely while talking on the phone).

It has been a well-known fact that Sikora very much and almost always loves to sketch, whenever and wherever he can, it is a part of his nature. For him, drawing is a “medium of creation”. Though by pedigree he is a conceptual artist, he has always thought and continues to think in images, and he visualises the thought of the work and its specific phases on paper in the first instance. Actually, he has drawn and draws everything – brainwaves, proposals, variants, concepts of works, the works themselves, exhibitions, installations of his works; for him, that is by its nature a pictorial script whereby he principally comes to an understanding with himself (this aspect has been first utilized in curation by Mira Sikorová -Putišová at the exhibition of drawings, A Decent Medium / Forms of Contemporary Drawing, Museum of Art Žilina. Hundreds of the “telephone” sketches and jottings came into being, and fortunately they have not ended in the wastebasket. At a certain moment of creative enlightenment he was not merely captivated by them but even pleased so much by their characteristically purposeless aesthetic that he resolved to work with them further.

The history of contemporary art reveals that handwritten jottings and incidental sketches have more than once been “elevated” to the status of artworks, or have become the basis of other such works. However, there is undeniable originality, courage and indeed innovation in Sikora’s manner of working with his notes and jottings. Now, how does a new Sikora image emerge? The basis or background is an authentic sheet of notepaper, which the artist scans and works upon in computer: he refines, blurs, selects, removes, adds, looking upon the sheet as a distinctive object of visual art, but working on it in such a way that the recorded note is essentially preserved. Afterwards he has the result digitally printed onto a primed canvas (according to the parameters of the printer, the artist may choose various magnitudes up to billboard size). The print is finally changed or supplemented by painting, commented on and elaborated with a concluding painterly gesture: this is perhaps the most important stage in the emergence of the image, where the artist’s painting skills can be fully expressed.

Let us take a somewhat closer look at the works exhibited. Apart from the authentic notes and notebook sheets, elevated to artefacts by adjustment, the exhibition comprises eight large-scale canvases. The three smaller works emerged rather as a commentary, a note on the five larger ones; in a somewhat different category from the others is I,Universe, created by enlarging his own signature to the point where it becomes illegible (a demonstration of the artist’s well-known humility before the vast infinity of the universe, at which he has never ceased to wonder…). While Constant 1,4571428 is a “repainting” of an old sketch, a draft for a work which was subsequently realised (Observer/Earthling I., 1995), Low Pressure is again an openly-acknowledged notepaper sheet, disclosed and visualised in painterly fashion, which the artist also shows in the immediately adjacent space, in another work of this series, presenting it in large scale behind a grid of bars, thus making it partially illegible.

The ideological and meaningful core of the collection comprises several monumental visual compositions (the number is still growing because Sikora’s interest in this problem continues). In the image 16. 1. 2012 at the MK SR, he works with an authentic record from the meeting at the Ministry of Culture SR held against the intention to transform Danubiana to “Kunsthalle”, whereas the list of participants is (with a bit of goody slyness, but why not?) an integral part of the work. The names, understandable abbreviations, signs and figures “levitate” here in some sort of additionally cleaned and arranged scramble between sketches of islands (the intended new work), which according to the author are the notorious islands of “positive deviation”. Thus, the picture can be read as a cultural and political anecdote ad hoc, which has hypertrophied not only due to its size (and hit hard the already quarrelling and fragmented internal art community). It is up to the viewer to say who is the positive one and who the deviant… The flaming Sikoriáda 2013 (23. 11.), generously painted in three tones of red, is a colourful manipulation of an older black-and-white drawing which feels like in was made in a single shot. The walloping movement, dynamism of the composition, is balanced by the sense of schedule and rhythmic structure of lies and areas. Even if it is impressive in its clean visual concept, Sikora decided this time to make it more “literary”, to confront the eternity and universality in its picture undertone with the temporality and specificity. Additionally, he included the history of outstandingly branched Sikora family into the composition, including exact and complete breakdown of names and surnames of the members of five generations. This was directly inspired by the traditional family meeting in Žilina, in November last year. The latest addition for Nový Sad is the picture entitled 9 days of Arrhythmia, where his own health condition record (not a good one at that time) has been upgraded into monumental composition.

In this series, the central place is taken by the threesome of images from the Barred Notebook cycle: each one of them considering a different event or fact: Barred Plan – preparation of photo exhibition in the Art Gallery in Nové Zámky in November 2011, Barred Pressure – listings of values originating during several days of blood pressure checking in October 2011, Barred Star – image sketch from the same year. These works go probably the closest to the visual we have been used to in Sikora’s art in the recent years, reminiscent of the heraldry topic of Malevichian and suprematist interpretations. The connecting element is the visually and semantically significant motif of bars as well as layering of individual image plans (even a found background material is used and commented). Something very subjective and personal is being confronted with objective and impersonal elements; the human, private aspects are covered, denied, suppressed, crossed out, and hidden behind the monumental black bars created as a sophisticated and semantic-symbolic painting formation. However, this is not only a personal expression, self-revealing and self-concealment, self-denial or self-barring presented by the author “against himself”. Similarly as in the most powerful works of the recent decades, in the Barred Notebook, Sikora again manages to transmit the message that it is possible to be not only personal but also committed in matters having broader impact and concern all of us.

In his new cycle of works, Rudolf Sikora provides us with a puzzle in terms of form and media: is this a drawing, graphics or painting? Or all of the above? Or does the most important come at last, through a touch of a brush? He says that the answer is not important. Therefore, we shall take it as Sikora’s authentic author’s contribution (even if a subversive one) into the infinite discussion about the meaning and essence of contemporary painting. In any case, the new cycle of works, he is jokingly calling a “love child”, has brought him, apart from everyday physical exertion and long-term assignment, especially a lot of fun, pleasure and joy from still having the creative energy… They say that pleasure and joy are infectious… And that is the point, isn’t it?

← Round table: Art and Crisis Romania →