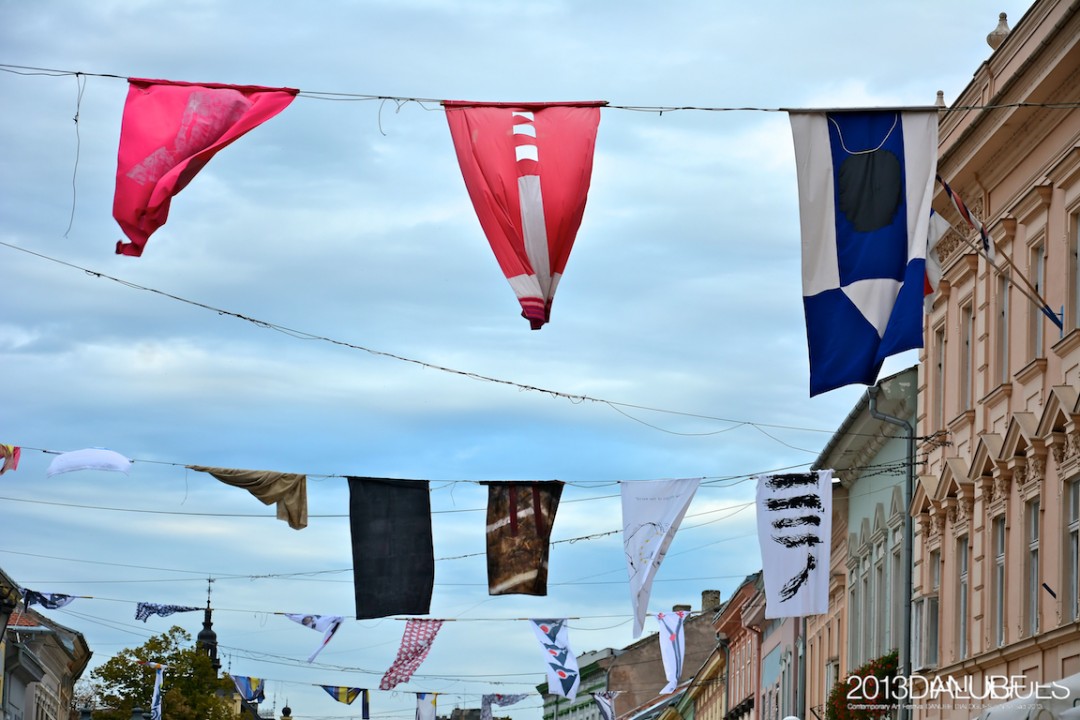 Since 2005 it has become a tradition in Novi Sad to hold an exhibition of artistic flags in the pedestrian zone in the heart of town. These individual works provide a spectacle in keeping with the spirit of contemporary art, while ringing the changes of theme, concept and artist. The city centre in summer enjoys a change of atmosphere of its own, brought about by this sample of authentic street art. Flags are symbolic creations, recognisable signs, usually the insignia of an organised society. This is why banners and standards are raised above the head, sending out an invitation to recognise the bearer’s identity, because they symbolise the essential character of whatever or whoever they represent. These particular ones represent the artists and their art. Set up in Zmaj Jovina, Novi Sad’s favourite walking street as part of the “Danube Dialogues” festival of contemporary art, the flags are a manifest synthesis of conceptual, iconographic, aesthetic, metaphoric, philosophical and ethical principles with an artistic message. The artists come from three of the Danube countries: Hungary, Croatia and Serbia. Interestingly, the theme of artistic flags in Hungary is an on-going process with a separate professional association of its own. Street exhibitions of flags are quite common in several Hungarian towns such as Budapest and Miskolc; the traditional summer art festival in Budapest’s Raday Utca, organised by the well-known Erlin Gallery, also holds one annually. At the Novi Sad exhibition this year, two artists from Hungary, Andrea Ruttka and Steiner Villö, showed series of flags evidencing clear artistic views while retaining the authentic character of the flag as a separate cultural phenomenon. The selection of flags by young Croatian artists from Osijek: Dražen Budimir, Robert Fišer, Josip Kaniža, Mario Matoković, Kristina Marić, Ana Petrović i Dora Tomić, was an interesting one. Most of them are students at the Academy of Art under Professor Frelih, who represented Croatia at this year’s “Danube Dialogues” exhibition in Novi Sad. The artists understood the flags primarily as transparent pictorial creations. Some of them assigned their flags clear, modern-day – chiefly sociological – connotations while the rest stuck to depicting an artistic iconography of personal narrative and visual expression. Finally, most of the exhibitors among the Serbian artists are old hands at the artistic flag tradition. Because of its familiarity, they are sufficiently experienced to use the flags to express their philosophical and poetic ideas, without violating the special character of this medium and remaining in the domain of their own questioning, creative continuum (Danijel Babić, Mira Brtka, Nada Denić, Goran Despotovski, Korina Gubik, Milan Jakšić, Jastra Jelača, Marta Kiš Buterer, Svetlana Milić, Petar Perić, Dušan Perić, Sibila Petenji, Zvonimir Santrač, Monika Sigeti Rastislav Škulec, Dušan Todorović, Tamara Vajs, Bosa Zirojević).