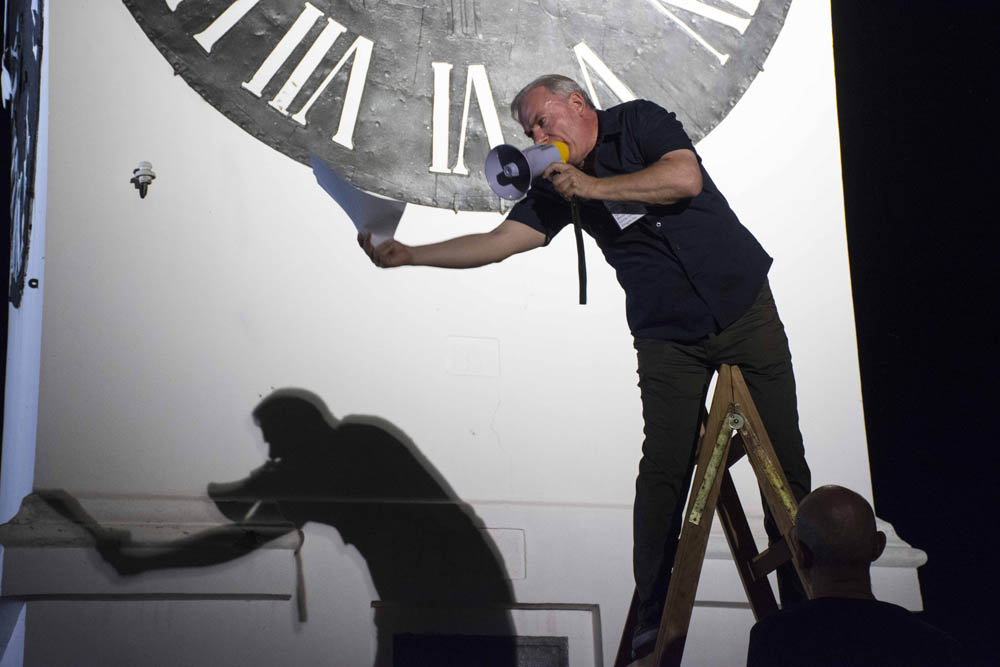 DD: It is generally believed that every artist who, by choice, finds himself in the role of selector/curator also has a personal stance in relation to the discipline/artistic medium he deals with, in this case –  performance. What is your opinion about the status and communicativeness of performance at this time and what guided you to select the artists? 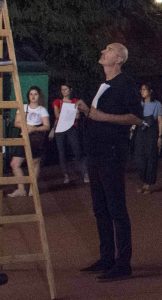 DV: Thanks to the director of the festival, who trusted choice, I was able to select performance artists, since, among other things, I myself am one of them and I am interested in the performance scene of the region, especially in Croatia, where I performed at the Performance Festival in Varaždin, and in the museums of contemporary art in Rijeka and Pula. My choice was based on the presence of this artistic medium in specific art scenes in the region. Today, in Croatia, there are several festivals dealing exclusively with contemporary productions in the field of artistic performance. Also, in Croatia, there is a strong influence of the artists of the older generation (such as Tomislav Gotovec or Vlasta Delimar, who were the first to engage in artistic performance) on younger artists dealing with this medium.

In addition, I feel that there is an urgent need for communication and cooperation among artists in the region. That is why, this time, I selected Croatian artists Slaven Tolj, Kata Mijatovic, Zoran Pavelic and Spartak Dulic. Although living in Subotica, Spartak Dulic is active in ​​Croatia, and for that, as well as for artistic reasons, he was interesting, as a link, to be part of this selection. Unfortunately, for health reasons, Slaven Tolj, despite good will, could not participate in the festival, and he was represented by video documentation of the performance called Quotes of My Performance.

Further, through this selection, I wanted to show different approaches to the medium itself, as well as its expressive production and artistic potentials. Thus, at the festival, we could see a performance based on conceptual or post-conceptual approach (Mijatović, Pavelić), then a post-modern performance with the elements of narrative and theatrical (Dulić), increasingly dominating contemporary art practice, as well as a performance based on the awareness of social and political issues (Tolj).

Through participation in domestic and foreign exhibitions and festivals, where I had the opportunity to perform myself, I realised that the performance medium has different communicativeness, showing special energy in contact with the audience. Performance has an interdisciplinary character, whether directed or mostly improvised, but the performer presents it to the audience. An artist’s live performance produces specific discourse, essential for this medium, containing a more direct communication and increased energy towards the observers. Also, the reaction of the audience differs compared, for example, to the reception to a photo or image. Although performance as a medium already has a significant genesis, starting with the avant-garde beginnings to the neo-avant-garde trends of the second half of the twentieth century, it is still considered a new medium. Hence, it still carries the potential of change, and at the same time resistance to technological revolution, depriving us of various segments of human physical and emotional experience.

DD: Can you elaborate on your artistic position?

DV: The African-American Baptist minister, politician and activist Martin Luther King said, I paraphrase, that art, which deals with souls, but does not deal with a society and  social problems is nothing, dust. This, in a way, sums up my selection for PerformaNS, as well as my own approach to the medium of performance and art in general. I base my artistic practice on my own existential experience, as well as on the historical experience of the society to which I belong, in a narrower and wider context. The very name and concept of this year’s Festival, The Use of Man, referring to the novel by our fellow citizen, Aleksandar Tišma, selected by the festival’s artistic director, Sava Stepanov, suggests general civilisational fears about the direction in which modern society is going. Therefore, it is a task not only of performance artists but also art in general, to show contemporary man, in a more powerful way, the problems he faces and to encourage him to think and engage in any kind of social activism. The imperative of today’s art should be: ethics above aesthetics.

DD: What is the reaction of the audience, what are the impressions of the participants?

DV: The architecture of the Petrovaradin Fortress and its Lower Town, where these artists performed, was a special challenge for them. It certainly represented this element of uniqueness in their performances.

Based on subsequent interviews, I learned that the diversity of the artists’ activities was particularly interesting to the audience. In fact, at the festival we had a distinctly physical performance of Spartak Dulić who simply “sucked in” the audience’s attention, and then Zoran Pavelić’s speech performance, seemingly static and repetitive, which demonstrated clear artistic activism, followed by the sound performance of Kata Mijatović which, by multiplying the sound, “warned” of the flow of time and the need for awakening, while the video of Slaven’s performance documented a prominent artistic character testifying on the personal and social pathology confronting the artist.

After their performance, Kata Mijatović and Zoran Pavelić expressed their satisfaction with the performance, as well as the ambience, and engaged into a creative conversation with the audience, while Spartak Dulić, whose performance concept involved emerging from the darkness and disappearing into it, advertently left a space for enigma and an independent reception to the public.