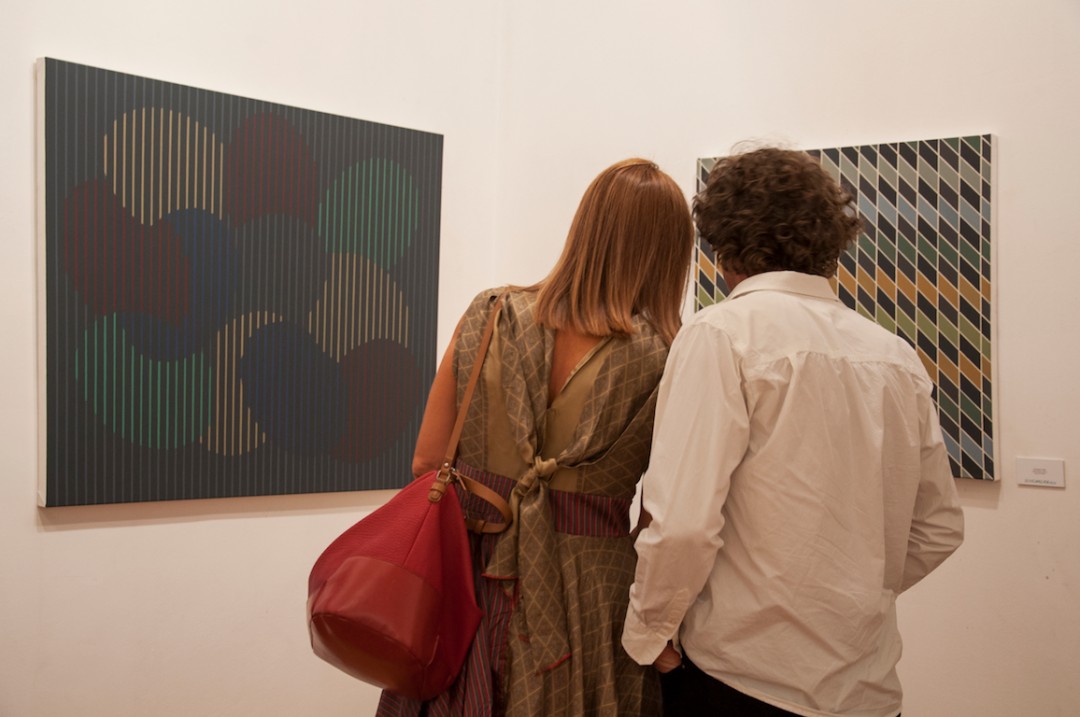 Nothing should happen by chance

Austria’s contribution to the Danube dialogues emphasizes geometric art in all its facets this year. In order to show this artistic spectrum, nine Austrian artists were chosen to represent the many-sidedness of a form of art that is – at least in Austria – underestimated.

Although variously implemented, the similarities of the exhibited works predominate. The geometric forms, the straight lines, the colours. Exactly those tools could also be put together under the umbrella term concrete art, which – ever since the development and naming of this form of art by Theo van Doesburg in the 1930s – have continuously been developed and haven’t lost their timeliness in art up to now.

The exact, partially mathematically calculated preparation of a piece of art, forms an important constituent of concrete art. Nothing should happen by chance during the development of a piece of art. The effect of the picture does not result from artistic intuition, but from precisely elaborate, formal development.

Playing with form and colour offers space to experiment and interesting possibilities of putting together the components. Wrapped in systems and combinations, which erupt in vibrating rhythms, they intrigue the viewers.

Based on the aesthetic impression of the geometric forms, all of the following artists prove the many-sidedness through their individual approaches, which can emerge, when “only” geometric forms and colours are used. But also the selection of the materials and how they are used, how the artist makes use of the lines in order to put some emphasis on the surface of the material, but also to give an impression of depth, or to awake the rhythm, the pulse, which lies dormant in all those combinations, are a reflection of exactly this many-sidedness.

This pulse can be found in many different forms, for instance in the works of Hermann J. Painitz, whose circles, which run like a thread through his oeuvre, and continue their own rhythm under various circumstances and systems. From the very beginning, – based on exactly calculated numerical series – he forms patterns, which find their expression in seriellen Bildkonzepten  . Those stretch through his whole work, just like the circles.

The variety of materials used by him also has to be emphasised. In his works, he combines various bases, on which he paints and which he puts on top of each other. Through this kind of use of a „normal“, i.e. a non-transparent base, and a transparent base, the rigidity of the forms is dissolved to a certain degree, for instance by a wave, which clashes with the colour on the transparent paper, or the blurredness, which is evoked by the loose overlap of the two bases.

Similar to Painitz, Florentina Pakosta also uses the serial image production throughout her whole work. She has been working on the series of works Trikolore Bilder since 1989.

In those pictures, ever since then she has been showing motion sequences and depicting historical or personal events, by means of geometric abstraction in those tricolour, geometric pictures.

Pakosta, who used to be committed to figural black-white depiction before, radically broke with this in her oeuvre. Not only because of the leap from figural to abstract, but because of the maybe bigger step towards the usage of colour.

Fritz Ruprechter also makes use of the theme of overlap in his series of works.

In various sketched out tracks, which cross and interfere with each other, several layers of aquarelle are applied. Because of this kind of glazing application of the paint every picture undergoes a long creational process, which enables the artist, to produce various nuances, which are unobtrusive in their coloration, but nonetheless have strong aesthetic effect.

Furthermore there is the spatial component of the works, which is formed through the development process, as well. Form and colour create the impression of a crystalline surface, whose play of colours is caused by incident light.

Like with most of the other artists of concrete art the tracks and lines are carefully prepared und the shades of the colours are coordinated.

This is also the case with Christian Eder. He uses the element of displacement in his work in order to illustrate the moment of movement. Shifting – as a fundamental part of the intrinsic rhythm – breaks up the rigidity of the geometric forms.

A vibrating rhythm can be found in the works of Christian Eder, whose subtle colourfulness penetrates the monotony of the geometric surface. Linear geometric structures are broken up by this shift and let the underlying colours shine through, which unfold their luminescent effect. Through purposeful use of colour and accentuation oscillatory pictures emerge, which invite the beholder to take a closer look. Brightness and darkness, colour and colourlessness, light and shade in interaction with the geometric constructs capture the imagination of the beholder.

A different kind of movement can be found in the work of Robert Gschwandtner. His works lure with optical illusions, which challenge the eye of the beholder through the movement of the colours and surfaces that are formed.

Driven by the deformation of nature through humans, who are annihilated through natural catastrophes, which are caused by oil that leaks into the ocean, Gschwandtner occupies himself especially with industrially used oils as material and medium.

With PVC pipes, which are partially filled with industrial oil of different colours, he creates a grid, which he puts on top of a geometric surface. The jumping back and forth of the surface and the various levels of the overlapping pipes leads to a visual effect, which resembles Marc Adrian’s Behind-glass montages.

Eric Kressnig’s works range from painting to sculpture. Playing with the specific features of the used materials on the one hand, i.e. the canvas and the wood, and the shiny acrylic paint which is applied on the other hand, plays an important role for Kressnig in the realization of his works. The tension that is built up in the work through the use of the materials and colours is indicative of his works. The applied paint covers the specific features of the material and stands in clear contrast to surfaces that have been left unchanged. Also because of the use of the edges of the canvases, which are much broader than common canvases, we could call them flat sculptures rather than paintings.

János Megyik’s works could also be called sculptures rather than paintings. They are in detail formed surfaces, which together with the materials used evoke an impression of spatiality, which is increased through the shadows that fall on the background of the frame. The interaction of material, lines, light and shade, it is the architecture, that is indicative of this type of art.

The spatial effect further comes into being through another aspect, namely the cuttings in the material that resemble industrial or urban spaces. This impression is additionally being enhanced through the specific features of the used materials.

In the work of Franz Riedl the spatial aspect of geometric lines comes into effect. To be exact, the expansion of the optical space through lines. He does this in two different ways: on the one hand by the spreading of real lines in space in the near surroundings, on the other hand by the creation of optical depth through a two-dimensional surface.

He takes up those lines in his works. He accomplishes this by taking photographs of urban spaces, i.e. buildings, and broadening their geometric forms within the surroundings. Another way of incorporating straight lines into cities, are his cardboard cuts, which evoke a spatial effect through simple cutting of lines into cardboard and thereby provoke an association with the urban space.