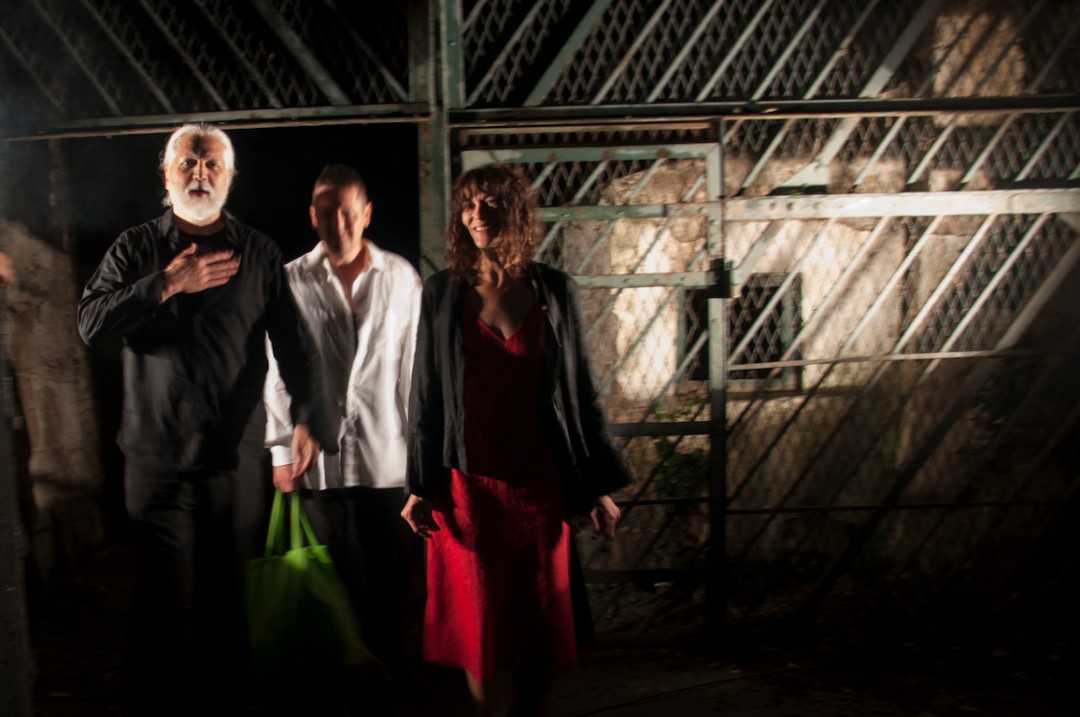 In contrast to their former work the couple constituting the artistic duo known as MP_art (2003-2013), has begun more critically to address the society and times they live in. Originally turned inward towards their intimate micro-world, their art reflected the personal aspects of their own relationship: amorous, sexual, artistic, intellectual, while at the same time sending universal messages on the complex matter of male-female relations. Sava Stepanov concludes that years of working together have produced a „conceptually coherent expressive corpus…with a discreetly committed effect“.

More explicit engagement by the couple in the current state of affairs in society may be seen in their 2013 performances: Serbian Contemporary. The first in this cycle was performed at an exhibition in Taiwan entitled Subdued Existence: Serbian Contemporary Art Scene, arranged by the Novi Sad Museum of Contemporary Art (May-August 2014). This was an interactive presentation in which the public was an essential participant, prompted into action by brief instructions on postcards provided by the artists. The idea was to direct attention to the vital importance of each individual’s effect on everyday events, in “creating actuality” in all its aspects, an element also present in their earlier performances. The second in the cycle was in July 2014 during the “Architectural Heritage as Scenery” project organised by the SCENATORIA association of Novi Sad, whose business is the revitalisation of the architectural heritage as scenery or atmospheric theatre. It took place in the Josif Gunpowder Magazine at Petrovaradin Fortress, a prime example of MP_art’s preference for locating their work in atypical, extra-gallery places such as isolated apartments, old industrial premises, natural or public settings where contact with the public is closer and “the specific character of the place with all its contexts of architecture, function, society, politics, economics, history and culture can be incorporated in the work“. This aspect was particularly striking in the third performance of the cycle at the Danube Dialogues Festival of Contemporary Art in Novi Sad on 27 August 2014, called Mainstream_SC. Compared with the previous two, it was a more layered work that dug deeper into the emotions. It lasted 15 minutes and began at 8.30 p.m. in an abandoned railway tunnel running under Petrovaradin. The choice of place was vital, pointing to today’s situation in a society where artists stress the importance of rousing awareness, of stepping out of the dark towards the light. Finding themselves in front of a dark tunnel, the entrance closed off with bars, the audience could hear only individual sounds: a man’s voice which at first appeared to be howling, but quickly turned out to be an interpretation of the latest new-fangled “folk” music, the tune distorted to the point of being unrecognizable, the lyrics emphasized and echoing around the tunnel in order to highlight their preposterousness; there was also the jingle of sleigh-bells and the uniform crack of a whip striking the ground. The sounds came gradually nearer out of the dark, reverberating to the high notes of the singer amplified by a megaphone which in turn intensified the echo-effect. As the sounds approached, M could be distinguished emerging out of the dark in a bright red dress, leading P on a chain and striking the ground with a whip. P was in a black suit, a black blindfold over his eyes, ringing the sleighbells – a crazed, confused figure. By them walked a man (Nenad Kuzmanović) singing into a megaphone. As they drew near the exit, the song and sounds ceased, P removed the blindfold and all three together announced: “Serbian contemporary”. The performance pointed directly to our current, ethically challenging everyday way of life in this country, with all its complex political and cultural ramifications. The bells, the black blindfold, the chain/lead, the cracking whip, the hint of eroticism or perhaps pornography, even the title of the performance clearly symbolised the state of affairs in a society ruled by absurdity, by media, political and other forms of manipulation, by fanaticism (religious, political), helplessness, madness, blindness and a poverty both literal and spiritual. In this, as in earlier performances by the couple, we notice the importance of space/environment, light/dark, words, sound, rhythm, movement, costume, choreography, composition, aesthetics, ethics. MP_art makes use of their own bodies, which become the media for transmitting an explicit symbolic comment on key elements of contemporary, everyday life, articulating “concern for man’s fate at the current juncture of civilisation“. As in their other performances, we see the emphasis this couple places on the power and influence of the word, the message, the symbol. As they did in the preceding two in the Serbian Contemporary cycle, MP_art re-examines the place, significance and role of the individual in a given set of circumstances, deliberately reacting in a critically defined way to the various – often equally absurd – aspects of contemporary reality in our micro-community.