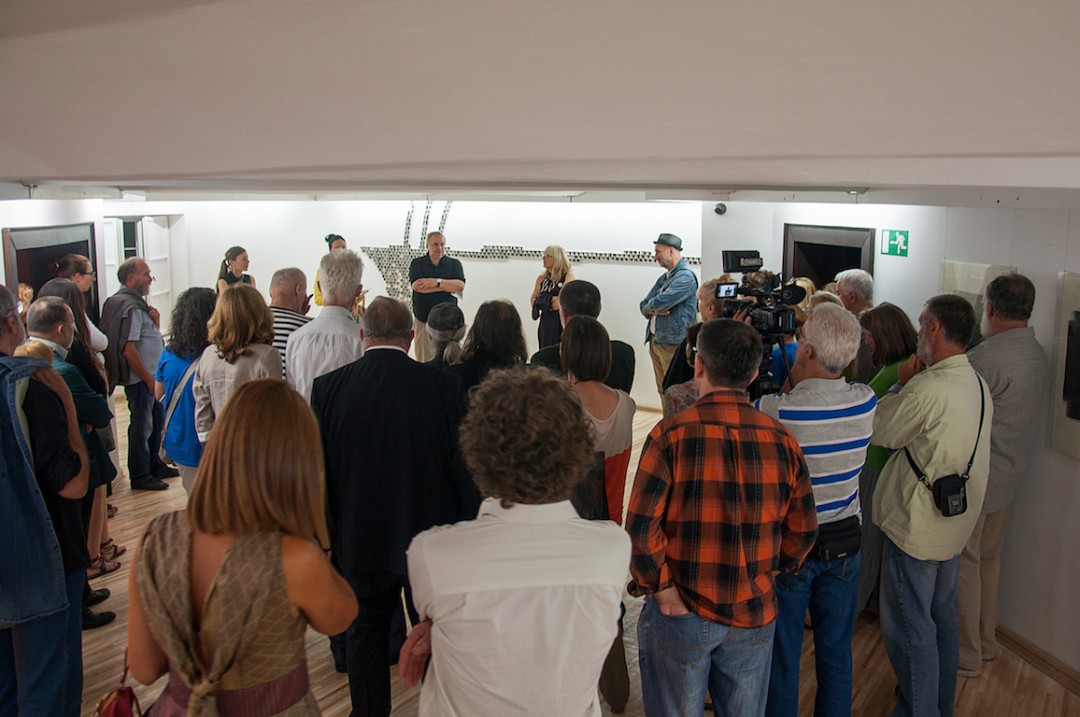 Sandra Zarth’s artistic universe is an abstraction in the regions of atmosphere and association. In the print making medium of monotype she is developing through a planned tolerance in the work process painterly compositions of reduced contrast in the spectrum of grey/black values. The two large-format works created in the monotype process of differentiated application of paint on smooth plate and spacious impression on paper named ‘behind I and II’ from 2009 show advancing and receding geometric shapes on a white background. Additives and staggered structures in the area and zones of subtracted to achromatic colour values produce smooth blur. In both sheets the variation of constants with the reduced vocabulary of colour values, their intensity and spatial extent lead to calculated uncertainty.

In formally simple image structure the maximum of painting’s composition unfolds – Fog from the year 2008 shows on a superimposed black surface a spatially staggered order of vertical stripes. The volatile fixed characteristic style blurs the contour of the applied transparent colours. Apparently superimposed on the image plane, soft colour chords suggest of a fragile glass-space and create a sense of the numinous – the formless creative impact.

The images with a darkening mood are without any references in infinite described variations integrated in misty zones. Only hinted idea content of the images corresponds to the suggestive content of titles. The small format Believable (2008), May be and Tomorrow (each from 2013) are intentional compositions in horizontal dimension, which blend into a colour-differentiated centre dominating the light/dark floating areas of framed form structure. The consequence of this progressive reduction is provided the untitled image (2011), whose horizontals interspersed with red colour traces in shimmering blur seem to vibrate at the centre of almost monochrome black.

The triad Darkness is falling (2011) and Silence (2011) is causing eccentric dematerialization of the pictorial space. The artist is inventing in these paintings dimensions of reality so vividly, as it is possible only in paintings. She is opening the boundaries of the two-dimensional image field into a space continuum that seems to extend into an undefined depth distance. Potentially unlimited colour spaces of a diffuse black/green/blue/red scale produce colour spaces whose vivid appearance can be filled with associations of distance, emptiness and infinity.

Sandra Zahrt’s magical images are of a powerful tranquillity are perceptual experiences of doubt and uncertainty. They are exhibits of fragile, unapproachable and radical beauty creating sensitivity to the sensual complexity of art.

Freed of the demands of documentary photography, Claus Dieter Geissler composes illusionistic black and white scenes, escaping from the material world and the chaos of profane reality. A frontal presentation offers a white-painted plaster surface, perforated over and over – broken pieces and objets trouvés whose original context remains unknown. Black centres, randomly distributed, invite the bystander to focus on the blurred circumferences of these minimalist hollow spaces. The artist directs our attention to a maximum concentration of black holes whose essence and content cannot be imagined or understood, and whose presence and separation in an imaginary space remain unclear; anonymous creative holes, the force of whose gravity seems so powerful that nothing can reach the outside, black objects that by definition absorb the light of all wavelengths, reflecting no light. Reduction to formal shape and a degree of abstraction beyond all objective association transports shapes of black nothingness into illusion.

In this series, in addition to eight hermetic pictures with holes, Geissler shows four photographs with black crosses. Abstract variations on a familiar theme: deep black surfaces intertwined, overwhelmingly expanding over a limited white background, display a key symbol of cultural and religious significance. Raw, elemental, these symbols prompt associations with contemporary icons of abstraction and Kazimir Malevich’s “liberated art” of 1915, with its black crosses, squares and circles.

This spacious wall installation entitled “Showcase of Memories” and composed of a multitude of small elements, contains about 800 miniature portraits in tiny, open, 5 x 4 cm matchboxes. These familiar en face likenesses, a tradition going back centuries, are valued to this day as the most personal mementos of a loved one. However, the portraits, ranged here in a vast multitude over an ample surface, testify to a different view of the past. The content of the boxes is made up of deliberately manipulated pictures of people whose alienation is made vivid by the photographic process of a calculated optical disruption of the picture, achieved by using too much or not enough lighting. These are artistic effects that irritate our comprehension. Geissler’s monumental wall installation shows – in miniature and in an uninterrupted string – photographically disfigured portraits which confront us with the consequences of the wars that followed the collapse of Yugoslavia. They show the alleged perpetrators who systematically planned and committed atrocities, only to vanish into anonymity; with the fervent support of the ruling forces, they succeeded in eluding justice and – without a shred of dignity – melted seamlessly into civilian life. Various portraits, displayed in a diffuse and unrecognizable way, rely on the logic of fraud, illusion and the overwhelming power of the imagination. The installation is at once as provocative and annoyingly controversial as it is up-to-date. It speaks of the confused geography of the black holes that swallow up violence, crime and suffering.

Claus Dieter Geissler is an artist of extremes. A sure sense of perception teamed with a confident aesthetic lead him into experimental territories, into formal, rich black zones, shot through with critical touches and dark figures that elude conventional criteria, the advancing digital age and the chaos of an overcrowded world.