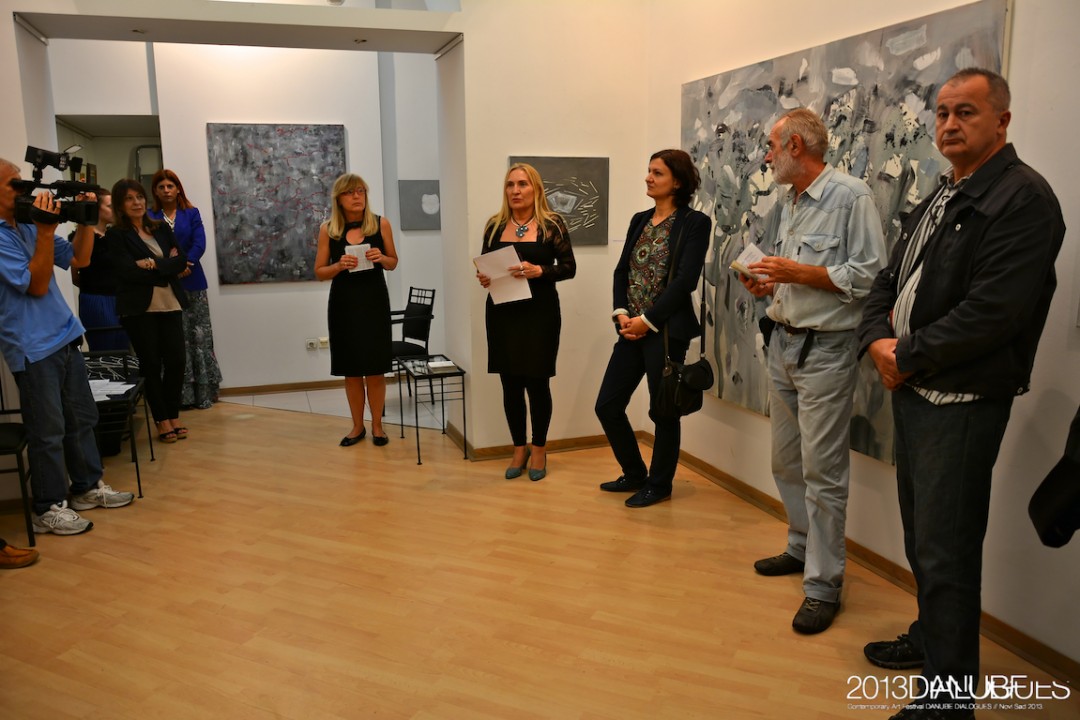 Liliana Mercioiu Popa’s debut made her familiar with the public as a practitioner of a conceptual art which used the hidden meanings of words, wondering about the relationship between those meanings and a certain visual acuity, which had always attracted her. The objects, paintings, or photographs of this period are inter-connected, revealing a spirit which was ready to explore artistic areas which had been less researched by others. The artworks in the series entitled On Fluidity, resulting from various visual experiments (photographic research, observations from nature), turn into a more condensed or a more tenuous matter, being as substantial as objects sometimes. Keen to understand and capitalize on the visual language of painting, the artist continues the visual research, offering a refined discourse, supported by the alternation of densely material, opaque surfaces, floating gently, and of light, transparent surfaces, a fortunate encounter between two worlds, created in earnest, stemming from complex processes of observation. No matter the subject matter chosen, Liliana Mercioiu Popa’s painting remains an area of purely visual research, where the artist makes a selection, opening a possible way, a temporary escape from the „wilderness” of the world, an invitation to make an existential as well as visual investigation. Thus, for more than a decade, her visual research focuses on an area of tactile painting, significantly oscillating between abstract purity – transforming the perception of the surrounding world – and an analysis of immediate reality, subject to a structural de-composition. The two types of visions are complementary and offer an overview of the realm of the senses, where spiritual landmarks are also sought for.

Because of her explorations in the extended field of art, painter by vocation Liliana Popa would perhaps be more appropriately styled a contemporary artist. Always open to experiment and the freedom to transpose her ideas through diverse disciplines and techniques, she does not perceive even the classic discipline of painting as anything restrictive, but rather uses the surface of the picture for experiment and new investigations. Her painting carries on a dialogue with various trends and is set on the border between figurative and non-figurative, but always founded on a concept. With great sensitivity and in a highly personal way, she has built up her own relationship with nature and the world of phenomena. The artist is in constant dialogue with the micro and macro universe, seeking out the hidden structure of things, so that to her, exclusively abstract or figurative painting is neither crucial nor necessary. It all depends on the discourse she chooses to use in order best to express her original idea. Liliana Popa searches for the sensitive border between the real and the visual perception of reality, seeking out the very discreet and hidden that cannot easily be spotted, but only perceived with the help of imagination. Her pictures are made in layers, usually by placing non-transparent surfaces one on top of the other, in thick matter, covering the colour surface with a layer of wax. Her plastic language of gesture is the unifying element of the diversely signalled styles, leading her to “pure painting”. The organic and mineral structures that appear in her paintings criss-cross through a core reflecting a special energy, resulting in stains of colour laid on with a strong movement in what at first sight seems to be articulated chaos. Popa is geared towards experiment, not limiting herself to the given format of the picture, nor even exclusively to that discipline, but moving freely through the field of art, she also directs her exploration to seeking out the hidden meaning of words. Some of her exhibitions are given over to his, particularly to verbs and the interpretation of their meaning. She emerges in a space where she uses her picture-objects to build a specific installation or create an atmosphere. Developing as an artist and working in a country with a stormy recent history, still in process of transition, her thinking frequently turns towards the idea of freedom, asking whether freedom is a personal feeling or reality, and how and to what extent the recent past affects present feelings of individual and collective freedom. Her attention is on the material traces of the recent past of society, traces forgotten and abandoned at the city’s edge, such as the ruins of architectural edifices, the skeletons of former industrial and water-management structures whose remains conceal a part of history and captive memory. She records them with a still camera, documenting them against oblivion. One series of her works deals with basement windows and openings such as we pass every day without noticing them. Here we see cellar windows of various kinds, from the outlying suburbs and in the city centre. Photographing them and placing them in parallel rows, she makes a new picture out of them, new territory from which they radiate a different effect and exercise a different power. This brief glance at Popa’s artistic work is an attempt to point to the richness of her artistic language, its versatility and fullness and the subtlety, acuity and complexity of her interests.