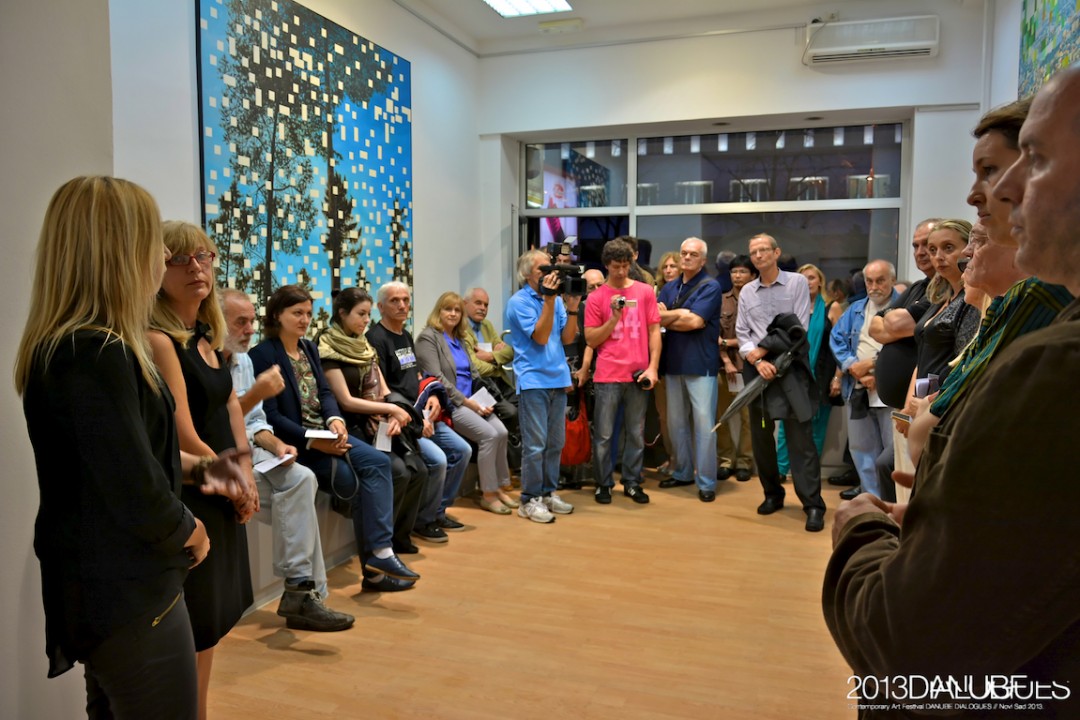 This year’s Danube Dialogues festival of contemporary art (Novi Sad, Serbia, 2013) featured Serbia’s entry Country Meets City by Milica Miličević and Milan Bosnić of diSTRUKTURA, a multimedia exhibition on the dialogue between natural and urban landscape in the context of modern living. Reminiscent of Thoreau’s Walden, or Life in the Woods (1854), the couple re-examine the relationship between two philosophies, the one geared towards the industrialisation of society, urbanisation, economic and technological development, the other towards the simple life, surrounded by nature. The exhibition investigates these two viewpoints, traditionally and historically opposing poles in how one lives and interprets life. The video item Country Meets City features a segment showing a neatly laid-out natural landscape, a park set in the middle of a city, surrounded by buildings (the Jardin Botanique in Brussels), site of the encounter of two characters, Flaneur and Wanderer, who discuss the advantages of rural versus urban life and vice versa. The views of Guy Debord, Thoreau, Arne Naess and Baudelaire pervade their exchanges as diSTRUKTURA points to the influence of groups such as the environmental movement, deep ecology, situationism, symbolism and the importance of civil disobedience. Their gallery exhibition is completed by two monumental pictures, one rural (Finnish Landscape), the other an urban impression of Paris (WestEuropean Landscape), digital photography deconstructed and pixelated, in the spirit of a digital glitch, quite meticulously rendered in oil on canvas. The couple’s approach to such a fundamental theme of art history as landscape is infused with various angles of observation, which give it manifold new layers of meaning and message. The traditional technique of oil on canvas or the new-media moving picture, rural or urban scenery, versatile work methods, stressing precision or introducing deliberate mistakes, a different philosophical idea, a point of view made visible through the characters of the personages, an open or closed system… these are the contrasts through which diSTRUKTURA points to the importance of dialogue and duality as their primary concept. The aim is to celebrate the existence of difference without directly favouring the individual, in the spirit of Arne Naess, who valued biodiversity and the realisation that each living being had the right to live and flourish, which depends on the existence of others in the complex web of interrelationships that is the natural world. The diverse social and cultural theories that define the phenomena of our modern way of living are the keynote of the Novi Sad diSTRUKTURA exhibition. The couple reflects on the importance of the natural environment, of a variegated approach to life in a desire for change and the restoration of the ruptured ties between man and nature. They do not strive for new theories or philosophical concepts. Instead, they revert to familiar existing ideas, traditional artistic forms and motifs in a contemporary social and cultural context, clearly sitting their explorations in the present moment. Their approach to the subject combined with a composite and innovative artistry give diSTRUKTURA’s work an immediacy that keeps it close to current European practices.