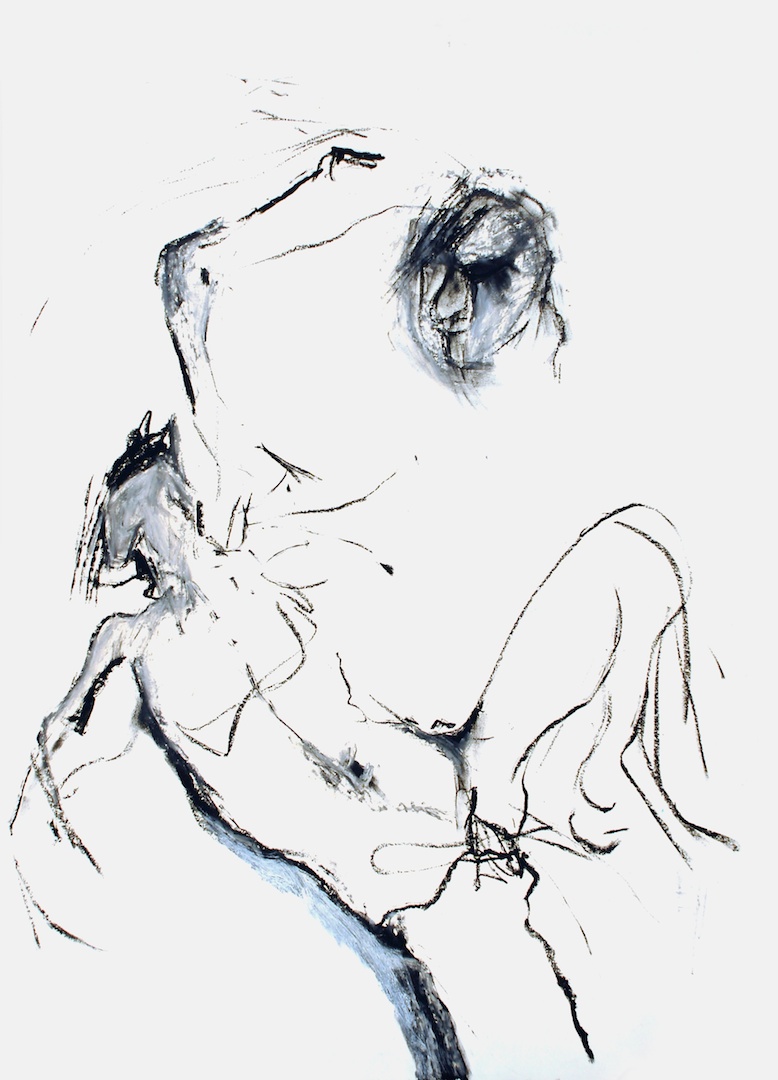 Six members of the Haus 10 art society from Fürstenfeldbruck, Bavaria, are showcasing their work for the third time to the public in Novi Sad. Having collaborated with the Novi Sad Cultural Centre and the Centre for Graphics, they are happy to respond to the invitation of the organizers and join in the Danube Dialogues programme. What attracted them in the first place to Novi Sad is a spirit of curiosity, creativeness and willingness to explore, learn and conquer new heights. As the only link between them is their membership of the same art society and their friendship, their works this time may be considered a cross-section, a random sample of what might illustrate German artistic thinking on drawing today. As a generation, young people have turned to the present moment, to criticism of society, to a picture of the world that looks more like images from the numerous screens that surround us, while the focus of the older generation is trained on nature and the gestural, on personally feeling and experiencing the world. Both express their curiosity through experimenting with materials and their relationship to form, using the line – whatever the artistic concept – to guide viewers to a clear read-out of the artist’s position. The line dominates both picture and drawing in the work of German artist Stephanie von Hoyos. Abstract circular forms remind one of boats, nests or even slippers, recalling images of tranquillity, places of refuge and peace where strength is restored. The thick layer of oil crayon and the black line circling on the bright surface of the paper provide a powerful charge of authorial energy. A painter of the younger generation, Stephan Juttner experiments in materials, choosing a large white PVC surface as background while the drawing itself is classic and realist. However, this balanced, documentary-like work shows something as unanticipated as the material he uses for groundwork. Children who find their entertainment in the streets of today’s huge urban conglomerates could easily find themselves playing the potentially dangerous game of slipping through the plastic sheeting of building sites, as Juttner has drawn them. Graphic artist Ingrid Redlich-Pfund’s work is serenely turned towards nature, whether following her own cardiogram in a long line or describing the plant world. The even pressure of her pen travels across the surface of the paper, delineating the leaves of herbs from her garden, of imaginary plants. Linear drawing, with no pretensions of exact representation of model, detail or shading, covers the white background like a wallpaper pattern. Flora overflowing the margins of the paper gives the impression of a picture too large for us to take in at once, making something monumental of what is in fact small format and catching the eye of the viewer. A sculptor by vocation, Hansjürgen Vogel happily uses other means of expression, particularly drawing and painting. He often takes part in Butoh dance performances, mainly as a silent observer and chronicler of the event. Working in large format, his swift, assured, almost sketch-like line captures movement, contortion, gesture, the character of the dancers, even the melody. At this exhibition he also shows several male nudes whose titles indicate a biblical subtext, brought into the present moment through a common dimension of suffering, misunderstanding, human weakness and conflict of interests. Stefan Wehmeier is a painter whose work depicts that least pretentious of subjects – landscape. In his contemplative and uncompromisingly personal style, he calls up scenery by various associations with mountain tops, stones, branches, mist, waterfalls. These are actually the impressions of a travelogue, changing creatively and deliberately from one picture to the next. With his carefully executed or strong, edgily drawn lines, he rather summons up the experience of the countryside and its materials than its appearance. One of the older generation, Rosa Zschau’s search for order finds a haven in geometry, studies and classical pencil drawings. Her extensive graphic experience comes to the fore through several of the traditional graphic media, mainly lithography. This time, however, she has chosen the ur-classic of them all: a lead pencil. In this simple, assured drawing of a few bottles on a table in her studio, she focuses all attention on the light, providing a painterly rather than a graphic artist’s solution to the play of light and dark surfaces. The thin blue line which seems gently and uncertainly to wind its way from left to right across the map of Europe does not reveal much of what it actually represents. Its length nevertheless dominates the other lines on that two-dimensional plane. It connects numerous red-encircled areas, cutting across and linking them. Only a context of scale and reality discovers in the greenish-brown surface the mighty Danube, which grows on its way through eight countries from a few drops into a potent force. Rather like these Danube Dialogues that from one gallery to another, join up the many drops of the fine art scene in the Danube countries with six drops from the German scene into a unique fine arts event.

← Linschinger // Vučinić Video Works by Artists from the Danube Countries →